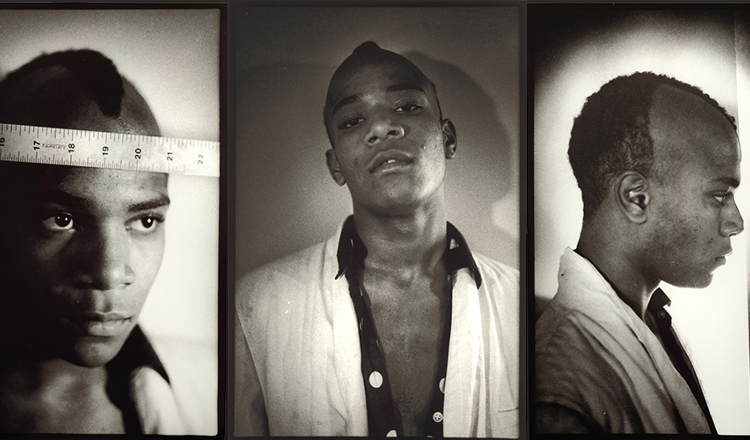 Gray performed at various historic venues including Hurrah’s, Mudd Club, CBGB’s, and The ICA. The band also recorded music that was used in films including The Radiant Child, Downtown 81, Blank City, Downtown Calling, and Basquiat.

Following the band’s reunion in 2010, Gray has performed live at several notable venues including the New Museum, Corcoran Gallery of Art, Brooklyn Academy of Music, and the Parrish Museum. The band is known for performing in art institutions claiming that they produce more than just music but instead create a fine art, multimedia experience. 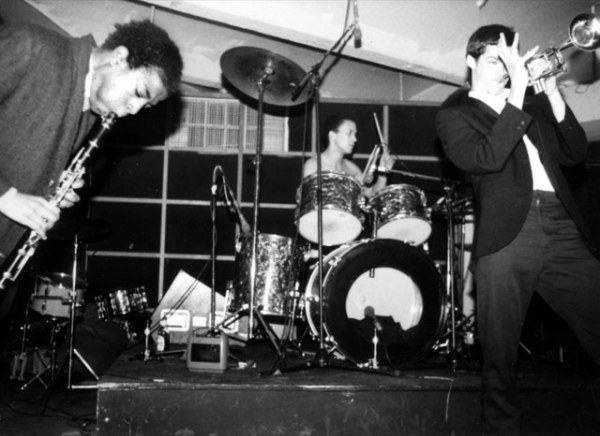 Gray – Hurrahs club in NYC, Autumn 1979.
The band went by several names like Test Pattern, Bad Fools, and Channel 9 before Basquiat finally named the band Gray after a textbook on human anatomy, Gray’s Anatomy. Gray’s Anatomy served as an inspiration for his paintings, who used to be half of the informal graffiti duo known as SAMO. 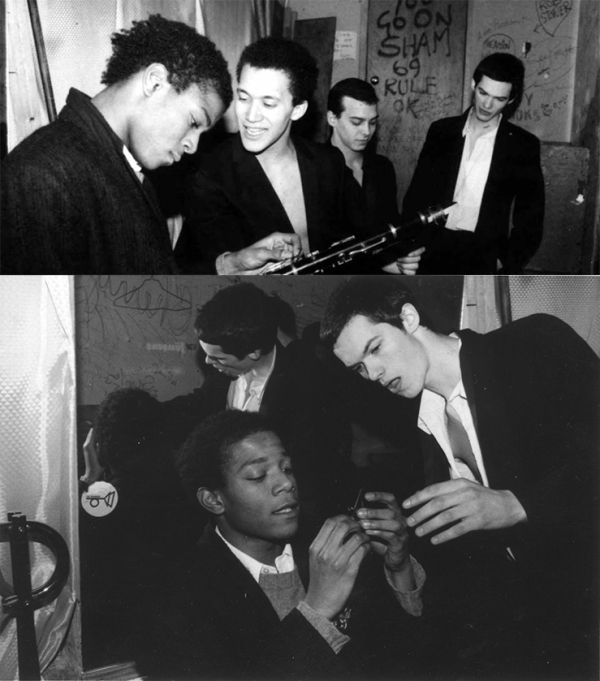 Gray was a perfect name capturing the kind of music the band wrote and performed: haunting and machine-like; the connection to industrialism, which was also a part of their style, as well as the vagueness of the word and the black-and-whiteness of it. 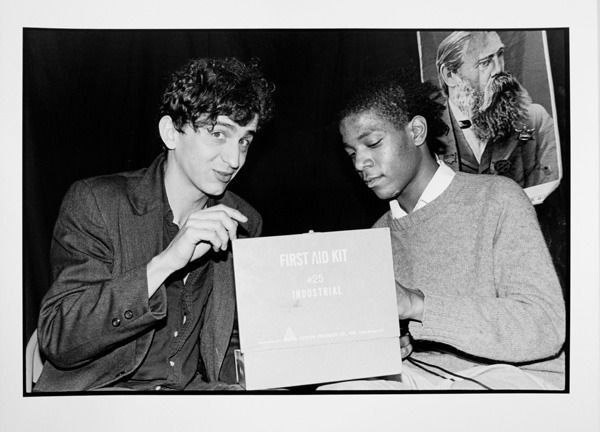 Performing at the same venues where Blondie and the Talking Heads were also performing meant that they were at the epicenter of New Wave – Hurrah’s, Mudd Club, and CBGB’s. There they contended for space and recognition with their incomplete, abrasive, and oddly beautiful style of music production.

Jean-Michel Basquiat after a night at Mudd Club in January 1979.

Wanting to create music similar to that of John Cage’s, Basquiat had to eventually ask Dawson to leave the band as his style did not complement this vision. Taylor then joined the band who interestingly played the electric guitar with the pick along the strings instead of against them. It was then that they decided to go with a more deconstructivist approach in producing music.

Most of their early tracks were produced in Taylor’s place at West 92nd including Red Ants, Braille Teeth, The Rent, and Six Months. The last show they did was at the Mudd Club in the summer of 1981 where they designed the stage out of scaffolding, lumber, and garbage. Holman said they made $5 each at the gig.

Later on, Basquiat’s career as an artist was an emerging and decided to leave the band as he did not want to be in a band and be a famous painter at the same time.

Holman is an artist, writer, musician, and filmmaker. As a co-founder of the industrial art noise band Gray, he has been a force in contemporary New York culture and art. In the 1990s, Holman alongside Taylor created sonic music performances at Club USA, Sybarite, Nuyorican Poets Café, and the Ritz. Holman is also known to be the first writer to use Hip Hop in print and producer of the first Hip Hop ever performed on stage.

Basquiat was an American artist who exhibited neo-expressionist paintings in galleries and museums in the 1980s. His art focused on suggestive dichotomies and appropriated poetry, drawing, and painting with contemporary critique. He died of a heroin overdose at 27. He has served as an inspiration to several artists who referenced him in their songs including Jay-Z, Franck Ocean, and Kanye West.

Taylor found an alternative career during the band’s gap period as DJ High Priest opening up for Kool Herc, Afrika Bambaataa, and Jazzy Jay. While he turned into a full Hip Hop DJ, he has also produced romantic music, which the band plans to incorporate in their second album.

The death of Basquiat 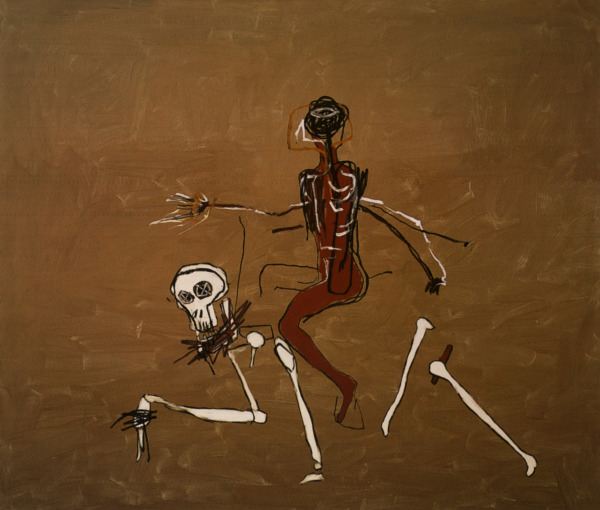 Riding with Death, by Jean-Michel Basquiat

Basquiat passed away in 1988 which led to a series of reunions for original members Holman, Taylor, and Thyme. They first performed as a band at Basquiat’s memorial and later on played several roles in the making of Basquiat in 1996. Basquiat is a MiraMax feature production of the meteoric rise of Basquiat as an artist. Jeffrey Wright, Tony Award-winning actor, played the title role.

Holman wrote the script for the feature with Julian Schnabel, Taylor composed and produced the soundtrack, while Thyme gave a cameo performance alongside Benecio del Toro, an emerging Puerto Rican actor at the time. The feature also led them to reenact one of their legendary gigs at the Mudd Club, which later on became the reason for their return in the music industry.

Their reenactment of the Mudd Club gig inspired them to create and record new music. From industrial bebop, the new Gray music evolved to electronica coupled with poetic vocals and groovy beats. Gray’s earned music soundtrack credits include Shooting Star and Without Walls, apart from those already mentioned. Thyme said during an interview with Charles Kuralt of CBS’s Sunday Morning that their new music is more pop and palatable but still with a poetic edge. 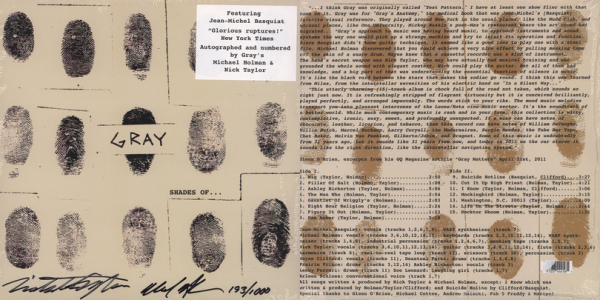 Holman and Taylor reunited once again to produce Gray’s first ever album titled Shades of on their own label, Plush Safe Records. The multitrack compilation includes the band’s earliest recordings and performances. The original members also worked with Dean Anthony, Prairie Prince, and Lenny Ferraro. The album paid homage to their original style – industrial and electronic. Other tracks range from fugue to trip hop.

*James Scott works as a chief writer and co-founder of Essay Supply college writing blog. He writes blogs on various themes. Mainly James writes about, education, art, music, and everything that thrills his taste.