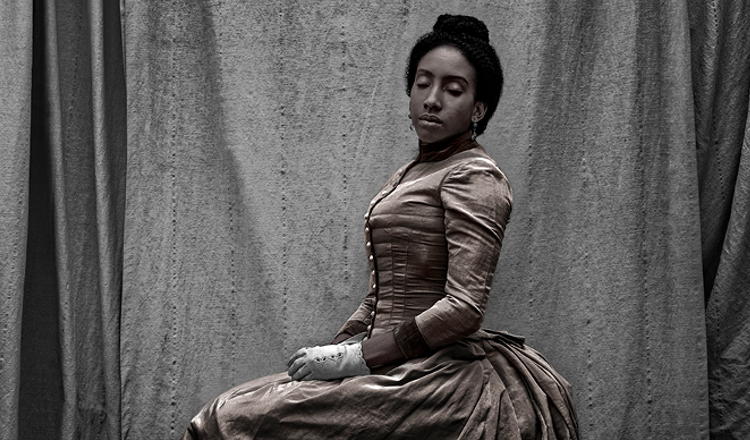 I must admit, I’d become very complacent with art gallery life when I was in the game blah blah years ago. The absence of photographers of color producing photographic commentary was at a low. I’d become jaded. At one point only considering political street art relevant.

Quoting cityscape photographer Richard Frank, on a NYC bus stop on our way to The Association of International Photography Art Dealers (AIPAD) 2016, I asked, how else can i get my work seen? He deadpannedly responds “You have to be dead [for people to take notice].” I knew he was joking but I understood his sobering statement all the same. I just didn’t want to accept it.

Truth be told, there were many civil rights photos on playback in my mind from AIPAD. There are so many more urban narratives to be told. Why weren’t there new, contemporary works being displayed?! As I pondered this depressing theory on my last day in New York, I stumbled across this striking woman who resembled a dress of expression I was familiar with. ‘What gallery are YOU with? I must stalk follow you… quietly.’ She lingered in the booth of French galerie, Beudoin Lebon. She was speaking to patrons in front of a photograph [see photo series herein] that looked remarkably like…

‘That’s you!!’ I say in delirious amazement. A quiet “Yes” came out of Ayana V. Jackson as we both stood and glared at the photo series. “Just about everyone has one of these pictures of their great-grandparents laying around.” Truth was, I had or I’d seen evidence of that. Her explanation and prose spoke softly in my ear as an eBook. The imagery truly stuck me. I thought i should share her with the masses.

A month later, i was able to do so. Fresh off the heels of a Parisian think tank excursion, right before her birthday, we made it happen… 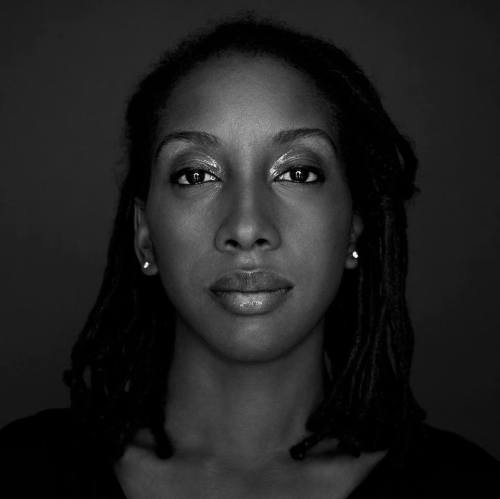 AFROPUNK (Erika Kristen): What were you doing in Paris?
Ayana V. Jackson (Shyly): Let’s just say as a blanket statement, my work is very processed oriented. I’m usually trying out new ideas. I was in Paris doing just that, I went out to the forest you never know when or how it will come to fruition.

AFROPUNK: Are you constantly working on ideas? Do you have the luxury to just break away and work on something on the spot?
Ayana: As an artist, you always want to experiment but because I am a studio based practice I do have to have some sort of planned set-up. I usually have a stylist that will help me with the costumes and I’m doing the photography. I have a computer setup where I can watch myself in the computer through each digital image taken so there is a lot of pre-production that goes into my projects. So I can’t exactly wake up in the morning and go do ‘this’. I’m always working out everything. It is feeding the Beast! [laughter] It could be a conversation I had, it could be reading, anything! My motive for inspiration is quite spontaneous and sporadic. 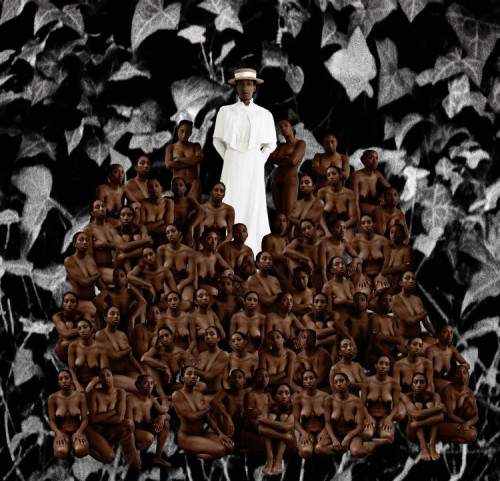 AFROPUNK: Well, you know how much I was exclaiming over your work at AIPAD. I was being a complete fangirl!
Ayana: Thank you!! [laughs]

AFROPUNK: You have reached great narrative feats with your work. Visually speaking, do you call yourself an artist or a photographer? It could be both of course. But do you concentrate on the imagery more so than the process of photography?
Ayana: Yes for many years, my father was a photography enthusiast, an amateur photographer if you will. he taught me. I knew the camera as a child and after studying sociology later I found out that the camera was more useful in expressing what I wanted to discuss through sociology. I realized I needed to become a photographer. I was quite married to analog. I loved the process, I used film for the first ten years or so but then when I started going into the studio for the first time and started performing, playing in my images, I had to move to digital. In doing that I started to play around even more by doing film montage. In a strange way I was at one point solely committed to being a photographer. I’ve now had to be more honest about my production and consider myself a photo based digital artist. 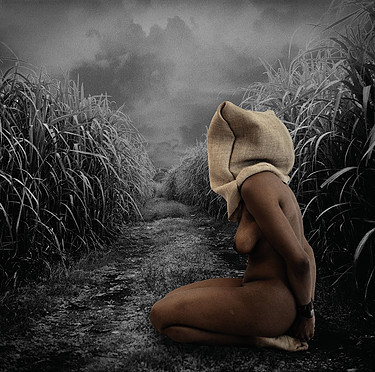 AFROPUNK: And your ‘performance’ in [edit: the interviewer’s faux pas] The Hands Up series is a miraculous example!
Ayana: Hand’s Up?! Ohh, I see… Everything in my work is always branching but has the same root at each project to the next project. so at the end of Archival Impulse, the last two or three images that I made, we were looking at the black bourgeois of the late 19th century. There has been a character, she keeps emerging in my work. she is dedicated to my the great grandmother Katie Clark. She was born in the late 19th century, she had my grandfather in 1912. She was an educated woman but obviously born from a slave legacy. One of the things I have always been concerned with was how photography is constructed in a racialized society. How photography basically framed the black body literally and figuratively. At the end [of Archival Impulse], I realize she was left out of the picture so this new series is loosely called The Becoming Subject. The Victorian dressed grandmother in To Kill or Allow to Live has several images of a woman dodging the Bullets of Justice, until she succumbs to the criminal justice system in the end. Each of those small images including the one with the hands up, has its own title. I would like the audience to get a full sense of what that full series was about. 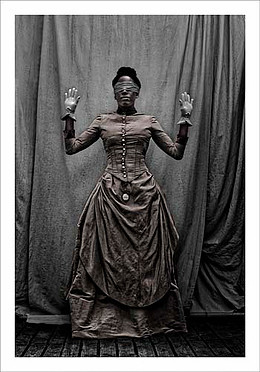 AFROPUNK: Let’s talk briefly about Poverty Pornography. Explain why you used your body in your series and why you didn’t feel as though you were objectifying your own body? You chose that route instead of doing a painting or to do it abstractly. You used yourself! My God, that’s bold!
Ayana: Good question. I actually had a panic attack in the studio but after a few interventions & conversations [laughter] I had to stand by my decision. I needed a first person perspective. I put myself in the subject because if I didn’t, I would be doing the same thing by objectifying the [someone else’s] black female form. Poverty Pornography is in response to the over representation of suffering as documented in the colonel experiment of 19th century, South Africa. I needed to re-appropriate that image; how we look at other people in pain, it’s the same nakedness. 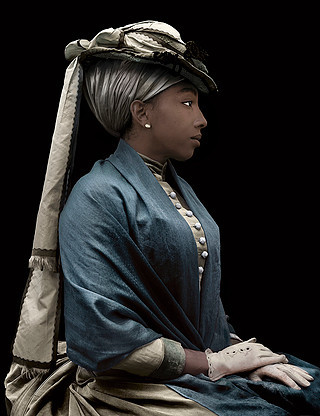 AFROPUNK: What has been a milestone moment for you?
Ayana: Of course I would love say Tokyo or Mali or Johannesburg but the one that means the world to me is The Studio [Museum in Harlem]. I was honored to be apart of their collection. Amanda Hunt is truly amazing! By far, my most treasured accomplishment 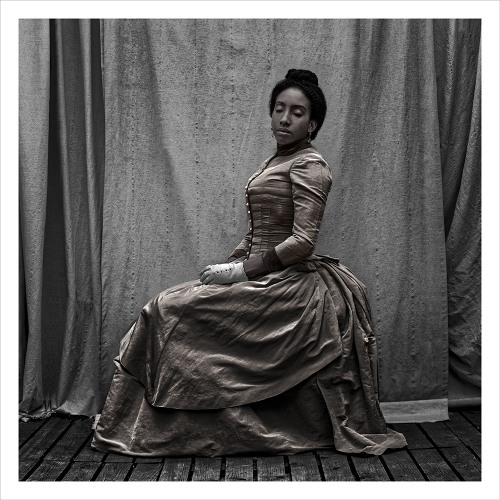 Ayana’s ‘Wild as the Wind’ is apart of the permanent collection at The Studio Museum in Harlem.
One of Ayana’s pieces from The Becoming Subject He Who is as if Death Were Not, will be auctioned off June 3rd at Wangechi Mutu’s 2016 AFRICA’S OUT! CELEBRATION BENEFITING INITIATIVES X UHAI EASHRI at Pioneer Works in Brooklyn NY.

*Erika Kristen is an international photojournalist based out of Chicago. She is best known for her coverage of heavy metal concerts with exposés on female and minority/majority musicians from around the world. She was featured in Prof. Laina Dawes’ “WHAT ARE YOU DOING HERE? A Black Woman’s Life and Liberation in Heavy Metal”.