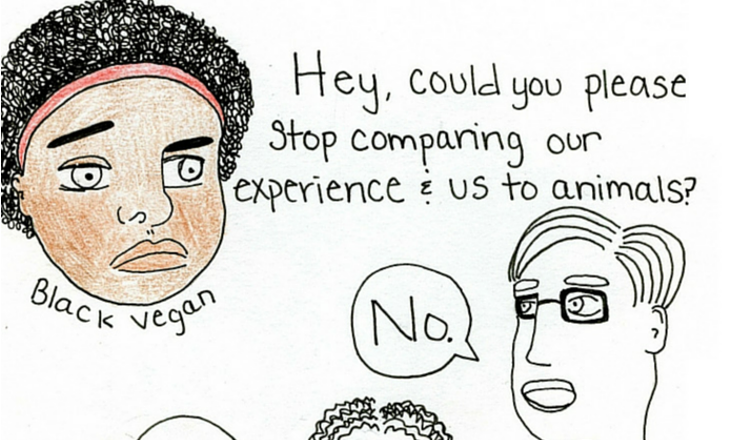 I am not here to preach veganism, I want that to be super clear from the get-go. I am a black feminist vegan who is interested in building and supporting liberatory movements. My veganism is one very important part of this. For the past month I have been engaged in an ongoing struggle with an “animal liberation” group at the Evergreen State College, where I am a student. This college is overwhelmingly white in an overwhelmingly white city in an overwhelmingly white state. It is also a college where young white people wear their political progressivism and radicalism on their sleeves (literally… there are so many anti-racist/anarchism patches sewn onto their clothes), yet various groups of POC unite privately to discuss daily experiences of racism from these same white people. It is the kind of place where I have had white men literally yell at me to stop telling them what to do while at Black Lives Matter protests. It is the kind of place where zero black people are in the animal liberation group, despite black vegans living in the city and attending the school.

So today, in this hypocritical white city, I saw this image in the local “progressive” publication: 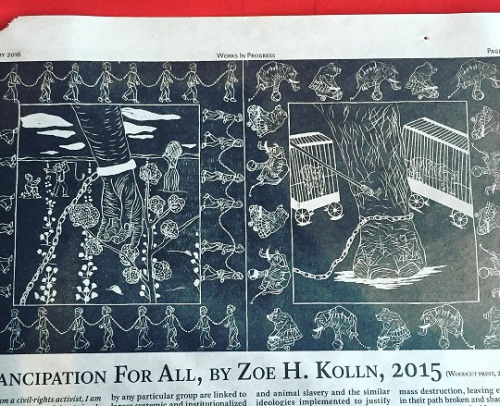 When I saw this piece of art and the corresponding article, my identity as a vegan was not triggered. What was triggered was an even more acute awareness of the reality that I am in an overwhelmingly white space, a space where I am drastically more likely to be murdered by the same police that protect the white woman who created this image. A place where I am more likely to have my body treated as property by the state & assaulted by the white citizenry, with no concern by the public or media. A place where I am dehumanized by “microaggressions” every single day. I am never treated as fully human. In images like this, white vegans erase my experience by exploiting the imagery of my people’s enslavement and suffering, which continues to this day.

This was my response, as a black vegan.

Imagery of chattel slavery is popular amongst white vegan communities. The relegation of black people as less than human was at the core of the ideologies that justified that system of enslavement. Because of this, many black people are understandably triggered and offended by white people’s casual use of this imagery and arguments that continue to compare our ancestors with nonhuman creatures. White vegans often argue that our desire to separate ourselves from nonhuman animals is a “speciesist” argument. What these people fail to recognize is that black people are still fighting to be recognized as fully our own species. As equally human. What does it mean when these white vegans argue against our demand to be viewed and represented as fully human, rather than as props in their version of nonhuman liberation?

The problem with this imagery is not only that it compares our ancestors to nonhuman animals, but that it erases our contemporary experiences where the effects of such comparisons continue to justify our oppression in this country. In 2015 alone, we witnessed black people being compared to animals in order to justify police murdering us and imprisoning us. We saw it when the media compared our athletes to animals. We saw it when our impoverished communities revolted against continued oppression by white supremacist systems. We saw it when a mayor in this same state described our first lady as “gorilla face Michelle”.

We are still being dehumanized by the systems that oppressed our ancestors, yet white vegans find no problem stealing imagery that is deeply personal and traumatizing to us in order to, yet again, compare us with nonhuman animals for their art and causes? 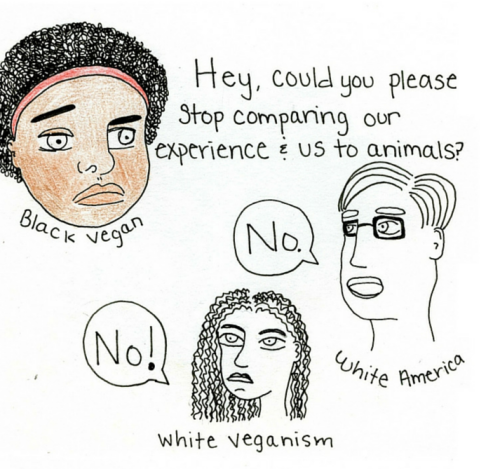 The artist opens her statement using a a Dick Gregory quote that is extremely powerful and beautiful:

“Because I am a civil-rights activist, I am also an animal-rights activist. Animals and humans suffer and die alike. Violence causes the same pain, the same spilling of blood, the same stench of death, the same arrogant, cruel, and vicious taking of life. We don’t have to be a part of it… When I look at animals held captive by circuses, I think of slavery. Animals in circuses represent the domination and oppression we have fought against for so long. They wear the same chains and shackles” —Dick Gregory

What she fails to realize is that she is not Dick Gregory. She is not a black person. She is not even in a space that is generally recognized as safe for black people. It is not her position to make these comparisons and it is obvious because, as a black vegan who both abhors circuses and supports the Elephant Sanctuary in Tennessee, the second I saw this art I knew that a white person had made it. It is clear that this is an outsider comparing my people’s struggle to that of nonhuman animals. Again.

This artist, and white veganism in general, fails to recognize their position in the intersections of society. When a white artist quotes a black individual as justification for their work, then black members of the artist’s community come out against that piece, it is time for that white person to question whether their art has had the impact that they intended. And when it does not, like this piece, the response should not be to draw more tokenizing quotes from other black people who are disconnected from the community. Again, impact is greater than intent.”

I am a black vegan. I am interested in building revolutionary and liberatory movements for all beings on this planet. When I see this type of work and the responses by the artist and the publication that printed it, I know that intersectional movement-building is not truly at the forefront of their minds. I really doubt if it is truly anywhere in their minds because understanding and respecting intersectionality and trauma is how privileged individuals build coalitions and grow movements.

For a while I’ve been interested in white veganism’s reliance upon the comparison of nonhuman animal cruelty with slavery and/or the Holocaust. I am a vegan who is against the use and abuse of animals, especially in terms of the contemporary animal agriculture industry. However, never have I needed to explain the unethical use of animals by comparing it to the treatment of my ancestors, to the genocide of Jews, or to the suffering of any other human persons. I believe that, as human beings who are capable of abstract thought, reason, logic, and subsisting without unnecessarily taking life, veganism is the morally correct choice. I think that valuing all life leads to an intellectual evolution in human emotion and connection. I know that adopting vegan diets is by far one of the best things we can do to combat climate change. None of these reasons rely upon comparing human suffering to nonhuman suffering.

*Steffany Brown is a radical black feminist who works to empower girls in STEM by day and studies race, class, and gender by night. She currently co-runs a blog at The Intersectional Vegan, where she writes about the intersections of racism, veganism, feminism, environmentalism, radical politics, & posts dope original recipes. You can find her Facebook here.