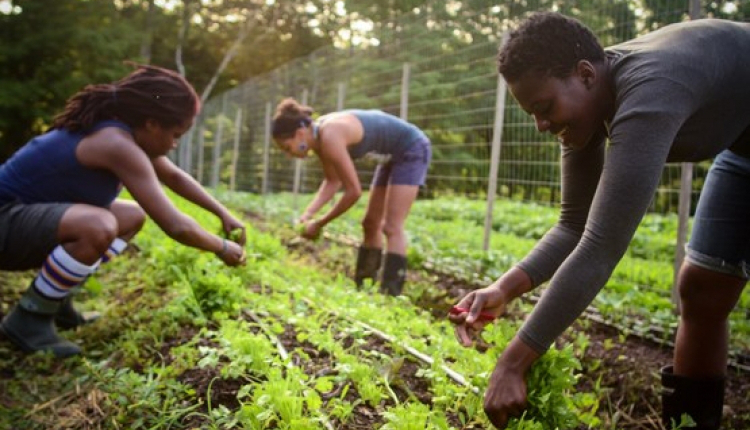 Check out this insightful write-up from farmer and educator Leah Penniman via Yes Magazine. In the article, Penniman (who works at Soul Fire Farm) argues that “If we are to create a society that values black life, we cannot ignore the role of food and land”. Penniman currently coordinates a restorative justice program, in partnership with the county’s Department of Law, in which convicted teenagers avoid incarceration by learning how to farm and using money earned to pay back their victims.  Staff at the Soul Fire Farm follow the same thinking as civil rights activist Curtis Hayes Muhammad, “Recognize that land and food have been used as a weapon to keep black people oppressed” and “Recognize also that land and food are essential to liberation for black people.” Read some extracts from Penniman’s article below.

The biggest killers of black Americans today are not guns or violence but diet-related diseases, including heart disease, cancer, stroke, and diabetes. These illnesses affect minorities at greater rates than white people, in part because of a broken food system that allows only certain populations to access healthy food while subsidizing low-quality food for the rest.

For the staff at Soul Fire Farm, Project Growth was about more than just restitution. We agreed with the position of Malcolm X in his “Message to Grass Roots,” a speech he delivered in 1963. “Revolution is based on land,” he said. “Land is the basis of all independence. Land is the basis of freedom, justice, and equality.” We saw Project Growth as an opportunity for these young men to heal relationships with their communities, the land, and themselves, as well as to recognize their potential to be agents of change in society. We wanted to make sure the participants knew we saw them as valuable human beings right from the start. So, on the first day, we began by asking for their stories.

land and food have also been used as a weapon to keep people of color in second-class citizenship. The U.S. government sanctioned the slaughter of buffalo to drive Native Americans off of their land. And the United States Department of Agriculture and the Federal Housing Administration denied access to farm credit and other resources to any black person who joined the NAACP, registered to vote, or signed any petition pertaining to civil rights.

“Police shootings are modern day lynching, and lynching was the tool used by white supremacists to drive black folks off of their valuable land and out of Mississippi,” says Dr. Monica White, president of the board at the Detroit Black Community Food Security Network. “We still see a systemic failure to value black lives, in terms of policing, access to food, education transportation, etc. The issue is privilege and oppression. It’s the same communities dealing with policing issues and bad food.”