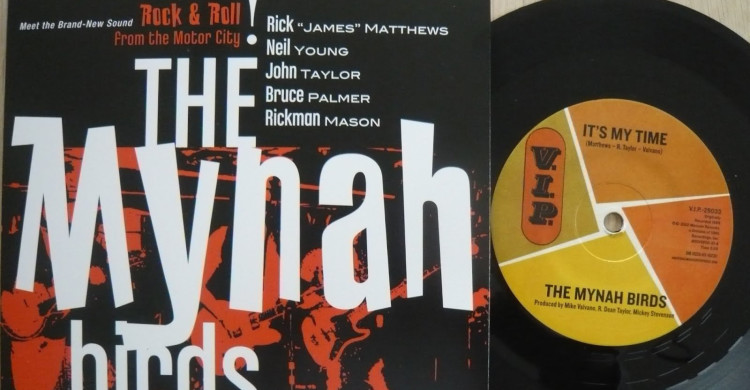 I’ve always been fascinated by the “almost-weres” in music. I’ve probably wasted entire days of my life imagining what Nirvana would have sounded like if Dinosaur Jr. frontman J. Mascis had accepted their offer to play drums instead of Dave Grohl, or what the 90’s underground would have sounded like if Guy Picciotto and Brendan Canty hadn’t quit their noise-post-punk-hip-hop collective Happy Go Licky to join Fugazi. But there are few bands that inspire more “what-ifs” than The Mynah Birds. Over its brief lifespan, the band featured future members of Steppenwolf, Buffalo Springfield, The Guess Who, and of course its chief songwriters: Neil Young and Rick James.

Almost 20 years before he was Mr. Super Freak, Rick James was a young singer who had fled to Toronto after being called up for active service in the Navy. The 15 year old James Johnson found himself on the street in 1964. After being rescued from a fight by Levon Helm and Garth Hudson (who later found fame first as Dylan’s electric band, and then on their own in The Band), the trio of future-rock-stars wound up at a coffee shop, where Johnson jumped on stage with the band playing at the time. The band renamed themselves The Sailorboys, after their new lead singer, before eventually settling on The Mynah Birds.

Johnson adopted the name Rickie Matthews at the suggestion of local musician Shirley Matthews, after a cousin of hers who had died. He pretended to be her son, and quickly became a fixture in the Toronto scene. At the time, The Mynah Bird Club was a hub of the scene, a combination side-show, strip-club, and rock club run by professional golfer Colin Kerr. The owner had hoped to spin his prized mynah bird Rajah, which he claimed possessed the reincarnated spirit of a 9 year old boy he’d met in India, into something of a traveling act. So Kerr enlisted his venue’s house band Bobbi Lee and the Scepters to record “The Mynah Bird Song” which his brother, perennial Toronto mayoral candidate Ben Kerr, had written. Kerr tried in vain to get Bobbi Lee to change his band’s name to The Mynah Birds. Only a few hundred copies were pressed, but as luck would have it, Bobbie Lee gave his only copy to a man named Scott Young. Scott brought his son Neil out to the Mynah Bird Club, and Neil Young soon became a fixture in the scene himself with his band The Squires. 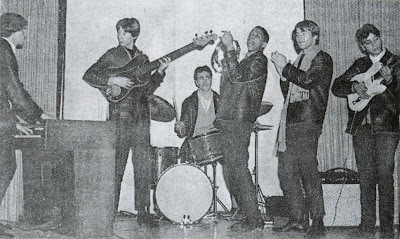 Though he had secured a number of major shows for the band, famously paying hundreds of girls to mob the band as they stepped out of their limo, his eccentric style and obsession with trying to land Rajah a spot on Ed Sullivan were too much for the band. Kerr reportedly left a tape saying “Hello, Ed Sullivan” playing 24/7 in the bird’s cage so he might learn the phrase and be ready when Sullivan inevitably came calling. Ed never called. After a period in which a who’s who of Canadian musicians logged time in the band (or more appropriately a Guess Who? Sorry.), Palmer and Matthews enlisted members of The Bunkys to join the Mynah Birds. With a new lineup and the financial backing of John Eaton, the reformed quintet brought on new manager Morley Shelman. Shelman secured an audition for the band in front of Berry Gordy and Smokey Robinson at Motown. Gordy and Robinson were blown away, and signed them to Motown where they’d hoped to break into the rock market. However, lead guitarist Tom Morgan was resentful of the spotlight on Rickie Matthews, and quit after their first session.

Left with a hole in the band, Bruce Palmer contacted a folk singer and lead guitarist he knew from
the Toronto scene. That’s right. That’s where we’re going with this. Bruce Palmer had befriended Neil Young while opening for The Company, a band featuring a young Stephen Stills (who had studied guitar under Jimi Hendrix and was nearly a member of The Monkees, because all things are connected. Just ask Rajah.). Palmer convinced Young to join his band as their lead guitarist. Though Neil Young initially considered the band just a paid gig while he worked on his solo career, he and Matthews co-wrote the song “I’ll Wait Forever.” With Young and Matthews at the band’s helm, they became a force to be reckoned with live. Young’s 12-string leads added a unique element to the band, bridging the gap between Motown soul, British Invasion R&B, psychedelic pop, and folk rock. Accounts vary, but the band recorded somewhere between 4 and 16 songs, including “I’ll Wait Forever,” “Go On And Cry,” “It’s My Time,” and “I’ve Got You In My Soul.” Release of “I’ve Got You In My Soul” as a single was scrapped when it was discovered that the song sounded suspiciously similar to “Little Girl,” a song by the Van Morrison-fronted Them.

The band prepared to release “It’s My Time” as their debut for Motown before Rickie Matthews’ past caught up with him. After discovering that manager Morley Shelman had pocketed their advance, the Mynah Birds fired him. In retaliation, Shelman ratted Matthews out to the FBI who arrested him for desertion. The Mynah Birds attempted to regroup and carry on, but without Matthews’ electric presence, there was no band. The recording sessions were scrapped, and wouldn’t see light for nearly 40 years.

Frustrated and lost, Neil Young and Bruce Palmer set off to California in Neil Young’s famed hearse to try to find Stephen Stills, even though neither cell phones nor the internet had been invented yet, and how big is California, anyway? The trio founded Buffalo Springfield, and went on to have a hit with the immortal “For What It’s Worth,” while Neil Young memorialized his time in The Mynah Birds in the single “Mr. Soul.”

After release from prison, Rickie Matthews began to go by Rick James (at the suggestion of a 16
year old Stevie Wonder), and crashed on Stephen Stills’ couch for a while before moving in with
bassist Greg Reeves. Stills was in the process of putting together a new band in the wake of Buffalo Springfield’s breakup; it was going to be a supergroup featuring The Byrds’ David Crosby, The Hollies’ Graham Nash, and himself. There was some debate as to whether to ask James or Reeves to play bass. Crosby and Nash favored Reeves over James, and Stills handed James a vial of pharmaceutical cocaine as an apology.

Crosby, Stills, and Nash eventually added Neil Young to the lineup, and replaced Greg Reeves with bassist Bruce Palmer before conquering the early 70’s with their epic harmonies. Rick James became a songwriter for Motown, before hitting it big on his own with “Super Freak” and conquering the early 80’s, long after The Mynah Birds were forgotten by just about everyone involved. I was a little kid in the 80’s with a folkie for a Dad. Rick James was as much a part of my childhood as Crosby, Stills, Nash, and Young. Still, I can’t help but think how much easier my teenage years would have been if my Dad and I could have bonded over our shared love for Crosby, Stills, Nash, Young, and James. Just imagine what that would have sounded like.