“If you think Zwarte Piet and blackface is wrong in the Netherlands, what do you think about the Zulus?” This the question that sat waiting for me in my Facebook inbox from my mother (who has been a very active member of Facebook since 2011 and who clocks my page religiously, might I add). At first I ignored it since it predated fb’s notification that you have indeed read a message.
I continued business as usual, posting my rants and frustration, informing my friends in the States and other parts of the Diaspora about the phenomenon of the Dutch fascination with blackening up and donning Afro wigs during one of their most beloved holiday traditions. My mother would not let it rest. “What about the Zulus?”.
“It cannot be easy to move from oppression and its mythologies to resistance in history; a detour through a no-man’s land or threshold area of counter-myth and symbolization is necessary.” – Laura Mulvey (1)

By Shantrelle P. Lewis, AFROPUNK Contributor *
One of the first white Dutch citizens to criticize me, a Black American woman, from New Orleans, Louisiana who was making a film about blackface in the Netherlands said “meanwhile in your own backyard Zulu is being celebrated.” Needless to say, to answer my mother’s questioning, and to cut off any attempts at discrediting my objectives with Black Pete, Zwarte Piet: The Documentary, and also to explore the tradition myself, I have begun informal research into the origins of the Zulu Club.

When I actually began to conduct some preliminary research, what I found out surprised me. While researching old articles related to the Zulu Aid Social and Pleasure Club, I discovered the most amazing commentary – an op-ed penned by my great-aunt almost seventy-five years ago. My paternal grandfather Charles Cleopold Lewis’ sister, Ora Mae Lewis, was a writer, journalist and publisher amongst many things and apparently, Aunt Ora was also a cultural critic. In 1940, nine years before the famed New Orleans trumpeter Louis “Satchmo” Armstrong would be crowned King Zulu, to the chagrin of some civil rights notables of the day, Aunt Ora Mae wrote “Instead of depicting ‘savages’ as representative of the Negro race as the Zulu parade does, why not depict African culture which would do credit to the race?” (2) 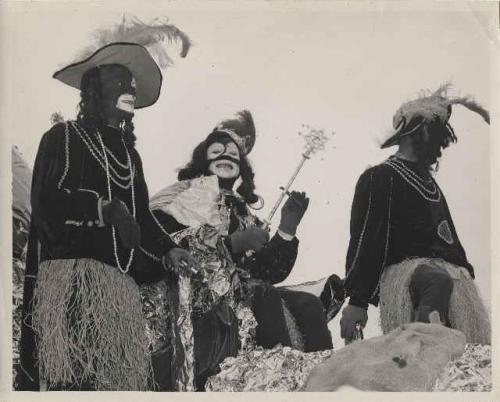 I was taken aback – mostly by whatever spiritual significance this “coincidence” represented. Here I was in preproduction for a documentary about blackface in the Netherlands and three quarters of a century before me, my great aunt was having the same conversation about blackface in my hometown.

The Zulu Social Aid & Pleasure Club, a mutual aid and benefit organization founded in New Orleans in 1910 in lieu of the racism of the early 20th century, was a response by NOLA’s African American community to the blatant and violent white supremacy in Louisiana, particularly as celebrated during Carnival traditions. The decision to dress in “blackface” was a tongue-in-cheek response to the stereotypical images of Black people and minstrelsy of the day… but also, a tribute to the African culture.

In accordance with historical traditions in many African-American communities throughout the U.S., New Orleans has its share of mutual aid and benefit societies, community-based organizations that provided support for its members, particularly when discrimination prevented those needs from being addressed in the absence of insurance companies that would handle financial hardship created by funeral costs, retirement, illness or other financial matters. In the case of New Orleans, these societies morphed into social organizations as well, and evolved in what is known today as Social Aid and Pleasure Clubs. These clubs are credited for establishing the world-renowned Second Lines, community-based jazz parades that take place in the streets of New Orleans, originally as funerary processions.

According to Zulu oral history (3), the club started when members of a neighborhood Mutual Aid and Benefit Society were inspired by a vaudeville stage production at the Pythian Temple Theater called “There Never Was and There Never Will Be A King Like Me.” True to the times, the production was a theatrical show in which the performers wore blackface, grass skirts and was a skit about the South African Zulu People. Despite having dressed up in “ragged trousers accompanied by a Jubilee Quartet,” (4) since 1901, a Black man named John L. Metoyer and his friends known as “The Tramps” paraded for the first time at Mardi Gras in 1909 as “The Zulus.”

Part of the formal mission was to be social but also to represent royalty, particularly historically when African-Americans lived and thrived in the face of violence following Reconstruction and the ascension of Jim Crow, the New Orleans Zulus were coming into being during an era where mainstream America, particularly the American South, was being entertained by productions like A Birth of A Nation, which had irrevocable and destructive effects on the Black community of which New Orleans was not excluded.

“During Mardi Gras, New Orleans ‘high society’ celebrates its blood lines and mythologizes itself as the heir to a powerful tradition of mysticism and magic. The elite mask themselves in expensive costumes and ride motorized floats along the city’s main thoroughfares, throwing beaded necklaces and souvenir doubloons to crowds of spectators.”(5) In this case, high society meant wealthy white people.

Mardi Gras in the Gulf States of Mississippi, Alabama and Louisiana, was not without its own white supremacist traditions sometimes masked, sometimes not by its revelry. In New Orleans, until the Zulus and their Mardi Gras revelry counterparts, the Mardi Gras Indians and Skull and Bones Gangs, started taking their traditions to the streets, there was no space for Black people to celebrate during Mardi Gras. Prior to that time, the only position for Black people during Carnival street celebrations was that of the lowly and dangerous flambeau carriers, men who marched with kerosene or butane torches used to illuminate the path of nighttime parades. Originally enslaved Africans or free men of color, they would dance with the heavy gas tanks on their back and flame torches upon their shoulders while crowds threw money at their feet, now plastic doubloons. Needless to say, the job of flambeau carrier was dangerous for the Black men who held the position.

So to dress up as powerful Zulu warriors, with elaborate feather headdresses, and as African royalty, was an appropriation of a Euro-American carnival tradition, but more importantly, the persistence and survival of an African cultural retention that can be found throughout the Diaspora, particularly in places with where Carnival is celebrated. While the origins or inspiration or the Zulu Social Aid and Pleasure Club was in fact a blackface show with Black actors (6), there is something to be said about Black men who self-identified with the likes of the Southern African ethnic group that produced one of the most powerful warriors and leader of one of the greatest empires in history – Shaka Zulu.

So when my great-aunt said that Zulu should find some other way to honor African culture that would “honor the race” than by depicting savages, I can relate to her sentiments that reflected specific respectability politics of the mid-20th century, during a time when Black people were being lynched in the South and mid-west as par de course for white supremacists. It was also during a time when mainstream images of Black people both home and abroad consisted of buffoons, savages, the uncivilized and the unintelligent. However, when one examines the history of Zulu, the pageantry, the costuming, or even the exaltation of royalty, I’m not certain that Zulu tradition fed into the stereotypes of the day.

Nor am I certain that it does so today.

Ironically, when I google Zulu, the first image to pop on the Wikipedia page is that one of my Uncle Stanford Scott, who has been a proud member for years. One of my dad’s younger brothers, Ronald Lewis is also a proud member of the Zulu Club, along with a few of childhood friends. As a child, it was a Lewis family tradition to “catch” the Zulu Parade under the overpass at the intersection of Orleans and Claiborne avenues in the heart of downtown Black community of New Orleans. I couldn’t wait to yell “throw me something mister” and catch the prized Zulu coconut or plastic spears and shields. When I look at Zulu today, I do not see a perpetuation of minstrelsy.

However, let me be clear: blackface is neither cool nor acceptable. While I am very anti-blackface, particularly worn by white people in any context and think that it’s one of many problematic manifestations of white supremacy, I don’t know that what happens when Black men and women blacken their faces, and adorn themselves in headdresses, is the same thing during Mardi Gras in New Orleans is the same thing. Call me biased. It’s something that I’m still working out, as I delve deeper into my exploration of Zwarte Piet but also as I investigate the African cultural retentions that persist in my hometown. Also, I’d be interested in hearing what my friends from South Africa have to say in response to the images and tradition, particularly those who are Zulu, before forming a definite take on the matter.

I’m sure someone reading this may ask the difference between the two cases. For starters, unlike the Netherlands where a majority of Black Dutch people feel that Zwarte Piet is dehumanizing and discriminatory, the vast majority of African Americans in New Orleans do not feel the same about Zulu. Also, while Zwarte Piet was a tradition started by white people, as a caricature of their formerly enslaved Black people, Zulu was created by Black Americans, who wanted to pay tribute to in some form, their African ancestry. Lastly, Zwarte Piet is a slave-like/servant figure whereas the New Orleans Zulus are warriors, kings and queens. There are many other differences but for the sake of brevity, I will not elaborate.

My late Aunt Ora Mae has inspired me to continue to research Zulu cultural practices and the use of, and perhaps need for, blackening their faces during celebrations. But for now, in the spirit of Mardi Gras, I say “laissez les bons temps rouler”!

Author’s Note: There are also a handful of white New Orleanian Zulu Members who have opted out of joining historically white Carnival Krewes. An ordinance was past recently by the organization’s governing body that mandates that anyone riding in the Zulu Parade on Mardi Gras day must blacken their faces, white members included.

* For more information about Shantrelle’s research projects visit shantrelleplewis.com
Facebook: www.facebook.com/shantology
Twitter: @apshantology
Shantrelle P. Lewis has recently been named a 2014 United Nations Programme for People of African Descent Fellow and is a 2012-13 Andy Warhol Curatorial Fellow. She is a U.S. based curator and researcher who travels internationally researching Diasporic aesthetics, spirituality and the survival and evolution of African retentions. Her traveling curatorial project, Dandy Lion, examines Global Black Dandyism through photography and film. At present, Shantrelle is researching ties between the Dutch Caribbean and the African Diaspora at-large. Additionally, she is directing and producing a documentary about the Dutch blackface tradition Zwarte Piet and Black identity in the Netherlands.