In 2012 Brooklyn Museum showed her solo exhibition Origin of the Universe, and in 2013 she created a limited edition cover for Solange’s True EP and collaborated with shoe company Brother Vellies on a line of desert boots. Thomas’ reach is far and her style, distinct.

I recently sat down with the artist in her Brooklyn studio to discuss her music influences, editing process, and how she makes her pieces pop.

In interviews you often speak about heroines in music. Who are some that inspire your work?
Millie Jackson, Betty Davis, of course Donna Summer, I love Sylvester, Valerie Simpson, Etta James, Eartha Kitt.

All throwbacks. What attracts you to their music?
It’s raw and it’s real. These were women that had to fight for their place in the industry for people to accept them. Most of them were ripped from their accomplishments. Eartha Kitt was blacklisted for speaking up against Lyndon B. Johnson during the war, but she persevered. They all persevered when they were knocked down. For me that’s inspirational and I aspire to that.

You’ve also described your work as inspired by the energy of the parties your mother used to throw.
It’s the energy my mother gave off. My mother introduced me to a lot of those women and my mother was that type of woman. It’s what I know and what I respect—someone who believes in herself and stands her ground, who doesn’t act according to what society deems as acceptable and expresses herself, her sexuality, her femininity. 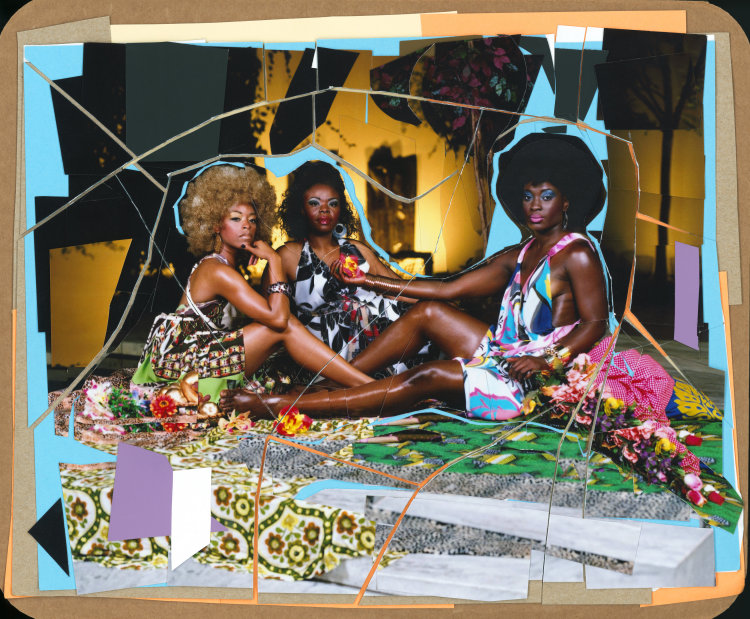 Your art definitely emulates this energy. What is your technique for achieving this?

I often use the afro as a symbol—that was a major signifier of women’s beauty, of empowerment, a political stance of awareness. Putting the afro in my images is a subtle nod to something that paved the way for where I am right now. Also, color. I look at the work of African photographers from the 60s and 70s, like Malick Sidibé. I also enjoy the idea of the photo studio and how Africans and African Americans document, photograph and collect our own history.

When you photograph you only use film, I’ve read. Why only film?
I do use digital when shooting images to print on archival paper for collage. But I use only film for shooting. It’s a long process, but I love it. I don’t want to see the image right away. I’m interested in the slow process of allowing the film to surprise me. Maybe something got into the shutter. Maybe I loaded it a little awkwardly, but that process is part of the outcome.

What’s your editing process when converting photographs to collages and paintings?

Collage for me is like drawing, so I’ll probably do two or three collages of the same model at a time to figure out the composition, the color, the rhythm of the piece. Once I make a collage they eventually all become paintings. But there’s another step that happens. I usually scan the collage and scale it to size to become another collage, digitally. Cutting and pasting and moving things around so it can fit to scale, that becomes the image I try to make into a painting. 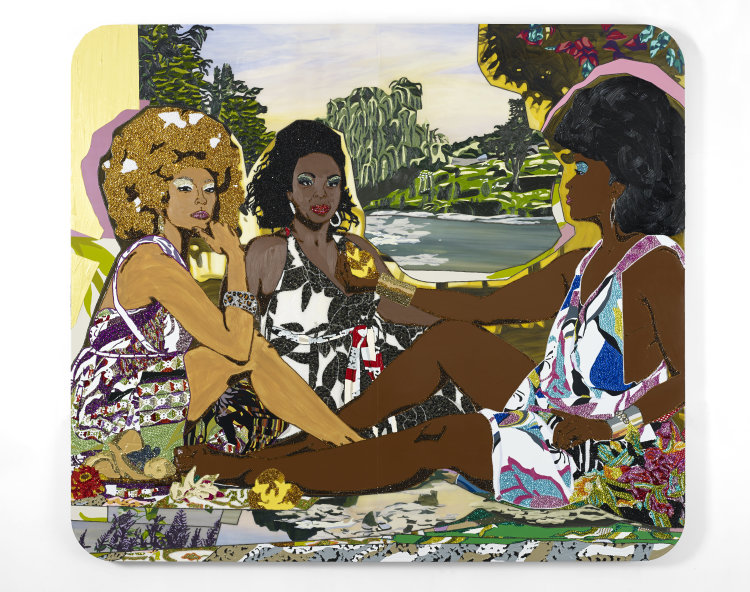 What attracts you to patterns?

Patterns juxtaposed are like our culture, this amalgamation of all of the different things we are as Americans. They add texture and color and different rhythms and beats, almost like music. I also like that they can be loud and gaudy and brash, ya know? They can sorta rub you the wrong way.

You also work a lot with rhinestones.
I started art much later and found myself more engaged with artists considered outsider artists—people, often of color, who didn’t have traditional training. There was this naiveté to their work which lead to my interest in non-traditional materials. I became interested in how women introduced to the arts craft materials and materials associated with the domestic.

Exploring with glitter and felt, I was thinking about formal aspects of painting, but using materials that people deem low art. That was exciting to me. After I got tired of using glitter, one day I was at the craft store and started working with rhinestones.

You spoke about the symbolism of the afro and the rhythm of patterns. What makes rhinestones distinct in your work?
Rhinestones exude light. In painting and photography it’s always so much about the light. The light guides the viewer into the piece, and I want the rhinestones to be one of the points of focus. I also think about implications of beauty.

Implications of beauty?
Take a Manet, for instance. The models are presented as aristocrats, but some of them were prostitutes or from harems. His images depicted sexuality at the time and are about the discovery and investigation of beauty. I’m really interested in the concepts of dressing up, masking and artifice, in figuring them out. I don’t have an answer, but that’s why I continue to do what I do. I’m trying to answer my own questions through the making of my art. 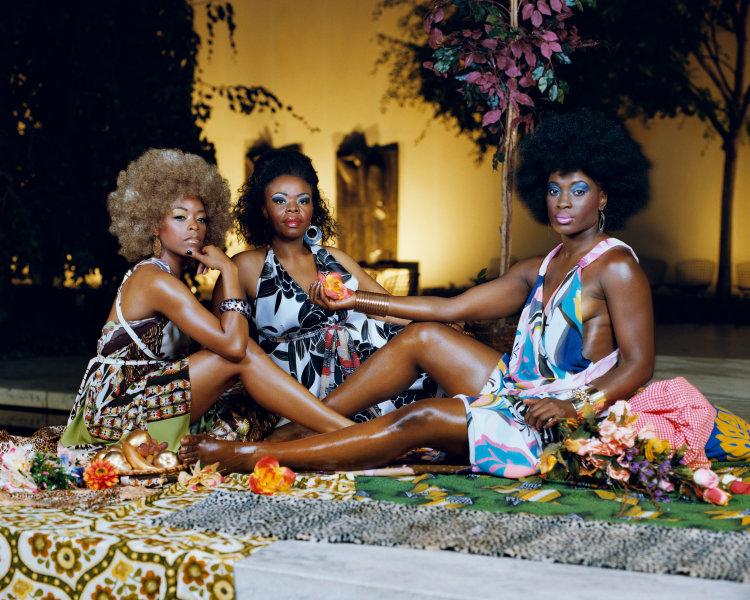