Nothing Good about Being Oppressed: Interview with Visual Artist Marcellous Lovelace

Visual artist Marcellous Lovelace paints the African American struggles. The highs, the lows…but never the in-betweens. From vivid depictions of unspeakable police brutality, and modern day slavery, to the beauty of Black Love and community. Marcellous Lovelace’s eyes are clearly wide open and he paints everything he sees… the good, the bad and the downright ugly. Check out his interview with AFROPUNK. 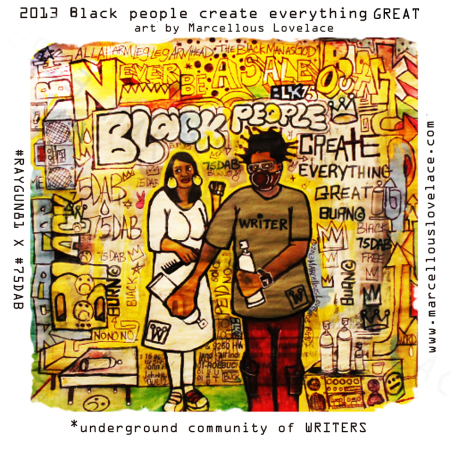 What was life like growing up in Chicago and how did this translate into your art?

Life for me in Chicago is always a realistic view at how corrupt America is and how a failed reality for African Indigenous people struggle in an undesired lifestyle. My art relates to this reality because I like to describe it as what failure looks like from a visual artist perspective. I tend to depict work / ideas and visions that convey a factual perspective based on what actually is thought or takes place. We live in a world that has no love and people will sale your crack, lies, disease and death quicker than they will give you something with essence. My artistic perspective is based on the Last Real African anywhere and that person has a soul, has a voice, loves myself and loves my indigenous African Diaspora through my visual communication. I don’t kill “Black People”. I keep them alive because my spirit teaches me that. Chicago use to have a wealth of soul now it’s a lot of dead land constructing destructive dead minds who serve no purpose; I don’t give anything that’s based in hatred and destruction any respect. But I do love my people in the city who don’t look to damage each other and be disrespectful as a way of life. Also Chicago is an address base only the South Side of the City of Chicago is where I was physically birthed and raised; my love is that of a planetary traveller. 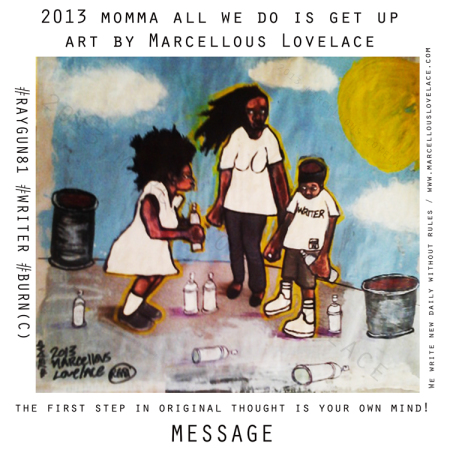 Did the school system nurture your gifts as a child/teen?

No school system nurtured any of my abilities. No place gave me any ability, I couldn’t lie and tell you anywhere or any collective of folk ever gave me a gift. I know that a gift is the ability to self nurture and me being able to build the skill that I control. My natural ability is self made and inspired I have no euro centric view to my ability, a euro centric view is absolute failure! I’m more intellectual than anything or ones of an evil nature can control.  But I do have and collected their studies and have a master’s degree as a means of translation. 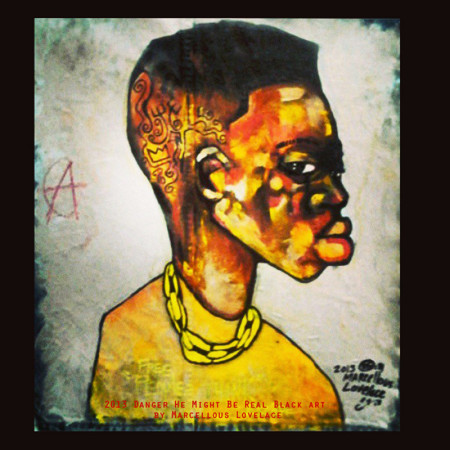 How has your technique changed over the years? Do current events influence your craft? If so, how does it manifest?

Everyday creates my art work I’m inspired by African Indigenous reality on an ongoing basis, I paint hundreds of paintings weekly and it’s based off everything that I experience. No particular struggle is more important than another. I’m painting “Exposed emotions in color” which is composed from oppression that has limited colored people of the globe from co-existing in the greater rewards bestowed from nature. From the Inside of neglect an open eye can monitor correctly the accuracy that’s supposed to be formed without permission. Nature has already predetermined that it is savage to chattel a population and direct them into a way of life that is foreign to them and so on. I paint the “#Raygun81” Experiments that detail as a way to better describe the ongoing colonial corruption of the African Diaspora. From the language, religion, forced drug usage, raping, pillage, apartheid, gentrification and constant social destruction of Indigenous Black Skin people all over the world. Raygun81 is based on Indigenous Black people’s systematic destruction through visual enigma’s that will be an ongoing study for the life of the Art by Marcellous Lovelace. These works will decode the evil realities Colored people of the world are faced with on a daily basis. Why Ray Gun 1981: The evil ones that allowed the savage opportunistic forced labor are the same people that developed genocide of all people of color through drug usage, colonial cash crop control and the consistent experimentation of the original people of earth (Blacks /Negros / Colored / Nubian etc ..) All of my art work is based on the contrast of Love versus hate from this ongoing struggle of a group of people that are used and are not using abilities in a proper way to govern themselves properly. Accepting ignorant degrading music, derogatory terms of endearment, TV shows and buffoonery as a people is not an advancement. It will always be better to never conform or inherit the nature of your oppression as a weapon.

How do you feel that racism has evolved over the years?

Racism has evolved into a technological mind control drug where racist and victims of the deception are playing out a scene in a poorly scripted stage play. Folks will watch it and enjoy it they will even buy the merchandise at the same time feel degraded by the lifestyle but do nothing to change it. Your oppressor has cleverly integrated your mind (Negro Minds) to accept the deception. He has convinced you to eat the worst food for hundreds of years and kill off generations from man-made sexually and socially controlled mechanisms and in turn birth children who wake up singing we have overcome. Seems like some ones been tricked into another swindle, you know like a conman or person who steals you from one part of the world and has you work in another land / area for free with no reciprocity or reparations and the most you can get out of it anywhere in the world is a pointless education that you can’t afford or gain any substance from because now you now think like the mentality that created racism. The victim is now lost brainwashed and totally confused. 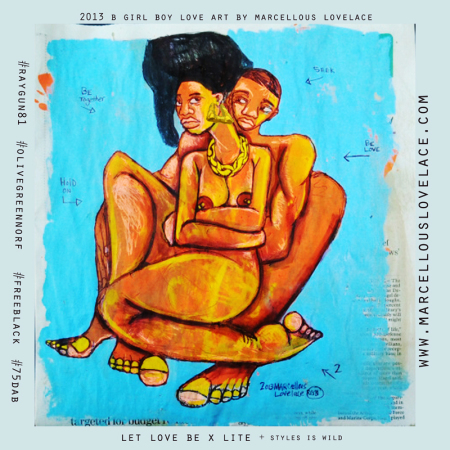 Do you ever receive any criticism for your Afro Nude arts? Do people always get it, or do they just think that you are obsessed with naked women?

Well to be perfectly honest criticism means I’m doing something right, if it offends I mean to offend. Yes I always get critics but it’s mostly from folks who can’t do anything but critic. These beings lack ability to live their own existence properly so they judge others because of the self hatred they were forced into. As far as the naked woman part I never make into to that point in the conversation. I’ve been told my response is usually brash and abrasive so I hope the visions are collected properly for the appropriate viewers.  Look for the new album I’m making in 2014 “Threatening Music x Brash and Abrasive” on www.infinito2017.com

Your paintings scream “Black Love”. How important are images such as yours?

They mean everything to me because I learned to center my thoughts based on the love certain family members have shown me at times and from the few occurrences of the love concept I’ve experienced. Images like mine are of great importance because they teach a fool how to think and someone who has it all figured out that it’s a lot more to learn and that no one is perfect, that no concept is alone. I’d love to one day build with like minds and share those experiences that I create and feel with that group. My afro indigenous visual art communication is something that I create because so many of our people have run away from the idea of natural sincere genuine independent self beautification as colored, blacks, Africans, Nubians or whatever adjective describer. 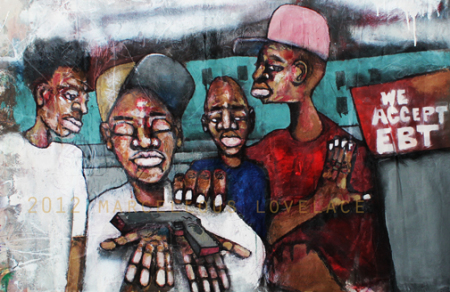 ‘We Accept EBT and Guns’ by Marcellous Lovelace (2012)

Which other artists/painters/musicians/actors do you admire and for what reason?

I admire Mos Def is a actor / musician who has spontaneity with style. Kerry James Marshall is a visual artist with purpose and a vision. Dr Frances Cress Welsing is a master teacher who is a corrector of failure. I like a lot of Jazz music like Sun Ra as well as hip hop like Common, Black Thought and KRS-One. Most of the movies or TV I watch is educational or completely free ranged fun like Basketball minus the foolery.

Sum up your artwork in just one sentence?

Marcellous Lovelace’s art work is the freethinking masculine exposed visions of what life looks like minus an evil oppressors association.

Why should we all own a Marcellous Lovelace painting?

We should all own a Marcellous Lovelace art work because he is truly dedicated to the voices of those who can go unheard. My work is meant to build museums and erect monuments for the directed thinkers who want reason in purpose. This life is of meaning and once you embrace my art for yourself you are supporting thought raised to a higher level so I welcome all positive assistance.

Find out more about Marcellous Lovelace at:

* Ayara Pommells is Owner of UK website Rawroots.com and a music writer for Soultrain.com, SOHH.com & AFROPUNK.com as well as an entertainment writer for Kontrol Magazine. Follow @YahYahNah.