The AFROPUNK ARMY are always doing fly things around the country and world, and Miami was no excpetion! We sent our contributor Faisal to take up the scene of this years Art Basel, the gathering of Arties from around the world to show, party and mingle in MIA. Check out Faisal what the AFROPUNK art kids are doing, and how their presence was received. Art for AFROPUNK sake!

AP’s Boots on the Ground,

I’m checking my email on my mobile gadget before heading into a meeting. “New news from Afropunk with Art Basel in the subject line hunh?” AFROPUNK is linked to Art Basel too? I click the link. Boom! Crunched between the lines heralding Andy Allo’s AP exclusive and a link to download Yasin Bey’s (Mos Def’s) new remake of “I Don’t Like,” the question “Whose going to Art Basel this weekend” is asked. I am, so I click. Up pops a butterfly-esque Nina Simone-mélange-of-a-painting talking about ArtAfrica at Art Basel? This is like the third time I hear about ArtAfrica: a special exhibit of Black Artists set up in a giant tent in Miami’s infamous Overtown next door to the historic Lyric theater.

I’m like, “Damn, how do I link with Afropunk at ArtAfrica?” I send a quick email to the AFROPUNK Army link and get a digital shout back saying they’re interested! I have a call with the content  She calls and gives me a few instructions. A few days later, voila! Faisal is a bonafide, certified, deputized AfroPunk Army storm-trooper and you’re reading this! That’s said to convey, If you read AfroPunk you might/could write for AfroPunk. Join the AFROPUNK Army. 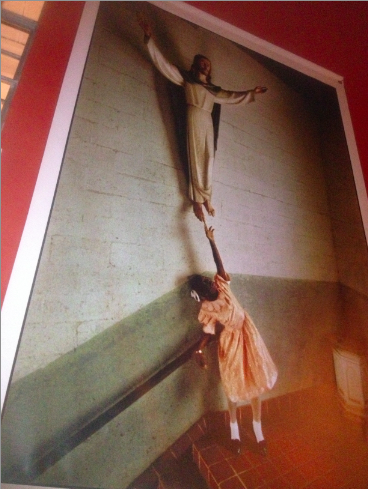 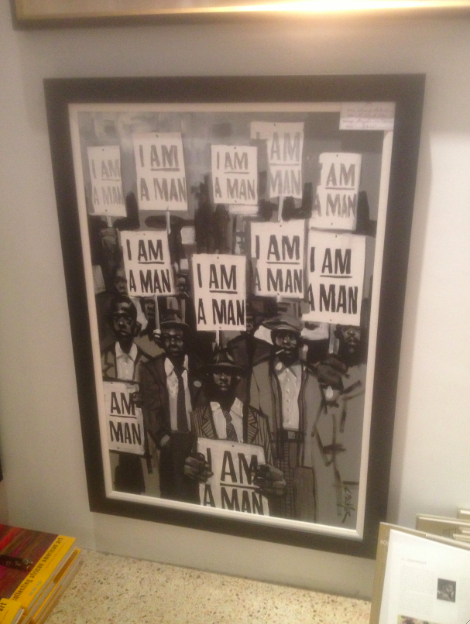 If you’re remotely tuned to the entertainment and art scene in “the bottom (MIA)” you can’t dodge the left, right, front, and back-side bombardment of rave and revelry that blooms and busts about Art Basel weekend. Art Basel takes Miami by storm every year since it first migrated from Sweden a dime ago in 2002. Art Basel is like this hybrid culture
grafted into the city for a weekend. Ensuing is a sort of mellow-frenzy where parts of the city morphs into this eclectic, artsy-chic, celebrity-driven rat race laced with a whole lotta cheese (big money spending.)

The Art Basel time of year becomes something epic; the people, parties, exhibits, shows, and vibe in general has a magnetic attraction: so much to do, so little time, so many heads coming through, so much inspiration to take in, so many opportunities to be advantage- ized. From the profoundly prolific to the sacrilegious and strange; you never know what you’re gonna experience as you walk the streets, galleries, and pop up shops of Wynwood, the Design District, or Miami Beach and the like.

I’ve been stickin’ and movin’ through these Art Basel events since 2002 and Black artists (local ones in particular) tend to get that Jackie Robinson treatment (yeah you can play with us, but we’ll disrespect you in the process) so I try real hard not to get caught up in the illusion of inclusion. 2012 promised to be a lil more open, so we made the effort to see if it was so.

People, Places, and Spaces We Met

Among so many other things, Thursday night was the V.I.P. reception and semi-opening for Global Caribbean IV French West Indies & Guiana: Focus on the Contemporary Expression at the Little Haiti Cultural Arts Center, curated by Haitian Sensation Edouard Duval Carrie’. Yours’ truly Faisal X.T. hosted the event organized by GlobalFlow PR who needed a French/Creole/English-speaking host to move the crowd. So, I saw the show, crowd, and art from a fortunate and lofty position.

-Nia Devine, Omilani, and a few others sang and blessed the evening that was opened by
the all-female drum brigade, The Sasa African Dance Ensemble.

-There were nearly 16 artists from Haiti, Jamaica, Guiana, Guadeloupe, and Martinique
exhibited. Photographer David Muir was on hand to sign copies of his book Pieces of 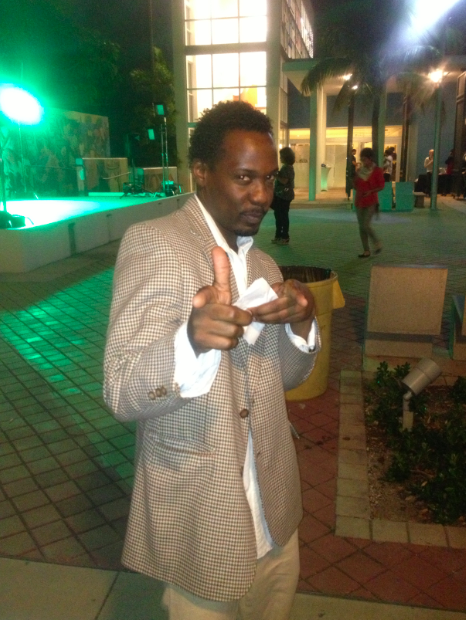 -I got a chance to parlais with Asser Saint Val (pictured right). With an interst in metaphysics, history, and social science, Saint Vals’s vision is to use visual art as a vehicle to communicate the phenomenon of melanin, by transforming melanin into an ambiguous living form which will perpetuate imaginations, and at the same time, commenting on the social taboos associated with the melanated individual. Sounds like AfroPunk.com to me!

As the night began to wind down, quite a few Black Art vanguards rolled through. Black Arts in America Ambassdor and publisher of ICABA Antonia Williams-Gary, the face and mind behind the Do You Basel? campaign stopped to chat on her way to ArtAfrica. “There is so much more inclusion of all things from throughout the African diaspora this
year, including the Caribbean. And even a strong Nigerian presence from the continent” she said.

My homeboy, Haitian-born, war-torn, and award-winning photojournalist Carl Juste rolls through and says, “yo Faisal, you haven’t seen my new gallery, come on follow me.” I grab a few of those delicious lil ackee and saltfish treats they were passing around, grab my stuff, and follow him out of the Little Haiti center, down a side street next door, and enter a quaint space with a few heads milling around sipping red wine and Barbancourt. “Here it is Papa, my new gallery,” says Carl as images on the walls with eyes, colors, and emotion command me to look at them. My stare of amazement was broken by Carl’s rasp, “yo I’m closing shop, we rollin’ to ArtAfrica, you wanna ride with me.”

We get there and I meet Artrepreneur Najee Dorsey, Black Art in America Founder/ CEO and his wonderful wife. Najee is the driving force behind an international movement to bring Black Art to the forefront.

To my surprise, my cousin and incredible painter Carlito Craig was a featured artist in ArtAfrica. I also met T. Elliot Mansa whose mesmerizing pieces capture the grit of the Miami grind. So much to do, so little time.

I link again with Carl Juste and a few of his crew (architect/artist Mikhaile Solomon and Gala who runs an orphanage in Jacmel, Haiti.)

Tonight we’re hitting this Graffiti Art show featuring a live performance by the god Rakim at Miami’s top shelf spot for live music, The Stage (Respect to Natalie and Samantha at The Stage for recognizing the importance of afropunk.com and putting us on the list.)

(Below: Not-so-innocent Bystander at Rakim show at The Stage, Miami) 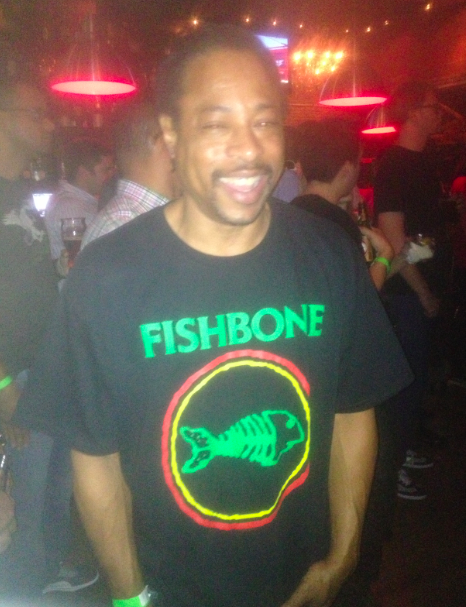 Because the show was in the design district we’re able to hit the Celebrity Art Series sponsored by Black Art in America. I spy Que Simmons founder of the Celebrity Art Series chilling with Danny Simmons, (brother of Russell and head of RUSH Philanthropic Arts Foundation). We exchange a few words on Being Black and Being Art! Que and Najee are on a special mission. 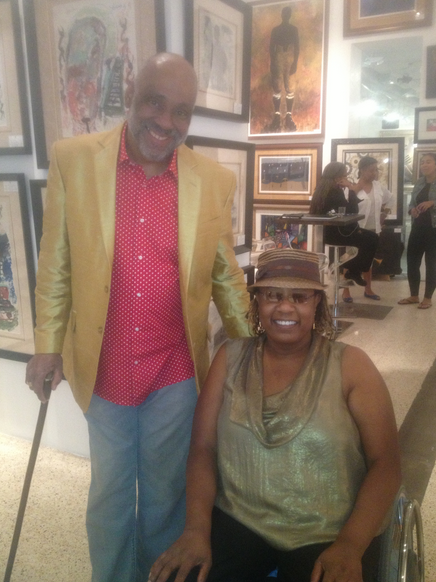 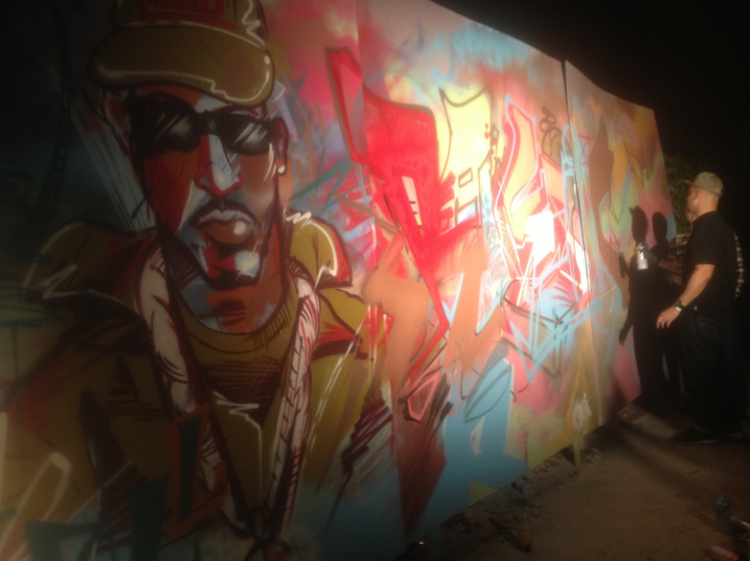 (Above: Rakim mural at The Stage, Miami) 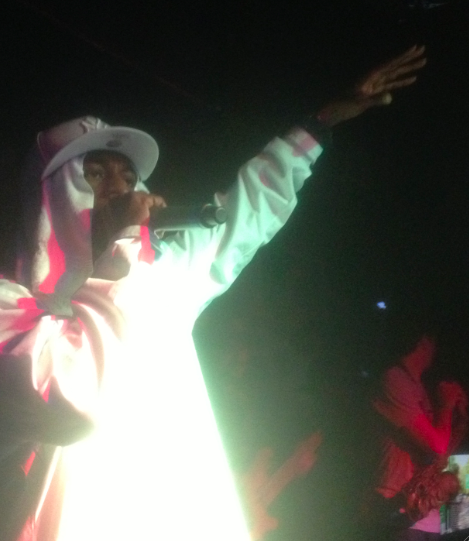 I can say all kinds of things about the Rakim show. Suffice to say with a live band (even though they ain’t look of the BRC-type,) the microphone fiend was super superb and supreme. The Stage was able to capture the essence of Hip Hop with that combo of live music and graffiti. (ch ch ch ch check out, ch checkout, check out the video.)

I had all intentions of hitting the official AFROPUNK joint Fade to Black, but by the time I log on to get on the list they say the list is closed. Never one to fear a closed list or getting in anywhere, I decide to go out there. The line is around the corner, the parking is dismal, and I really don’t want to contend with the bullsh*t that’s often part and parcel to these environments. So I bounce! A few days later, I go back to the flyer to see about getting some pics and words for your reading pleasure and see my friend Esther Park was one of the Fade to Black organizers. She said it was bananas. Hopefully we’ll get some pics to do some post-partum AfroPunk Art Basel coverage.

Black Arts in America said it best, “African-Americans having a visible presence in Miami during Art Basel week afforded the international arts market a unique way to become familiar with the multitude of artists and depth of thought in the black arts community.” 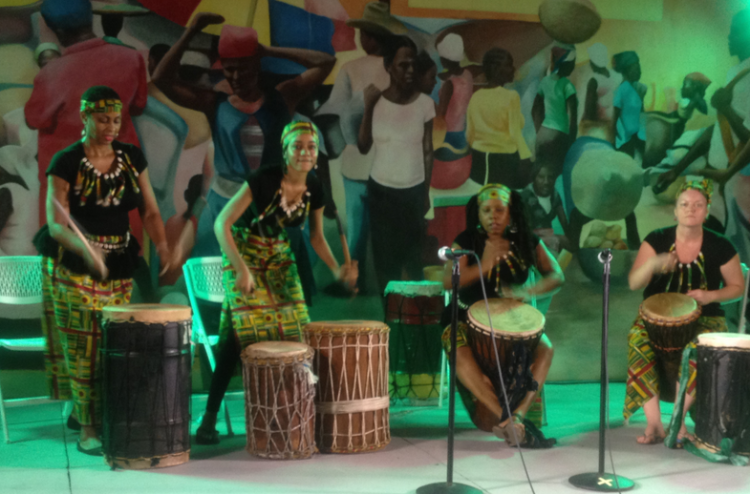 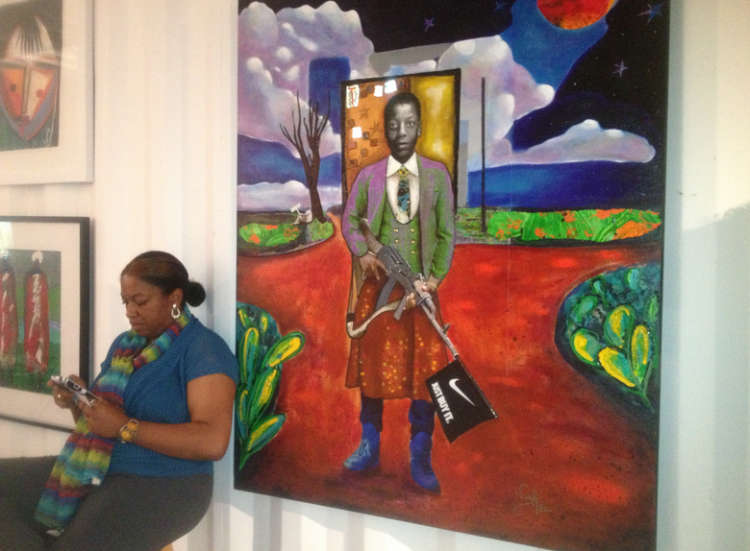 Stay tuned and get prepared! Next year, if we’re still around, and the cosmos permits, we gonna AFROPUNK Art Basel on a whole other level.

Faisal X is a family man, producer, self-mastery seeker, and AFROPUNK Army cadet, based in Miami, FL. If u r any of those things, hit him @faisalxt, or faisal@souljah.com