FEATURE: Loïs Mailou Jones: Inside & Outside of The Harlem Renaissance 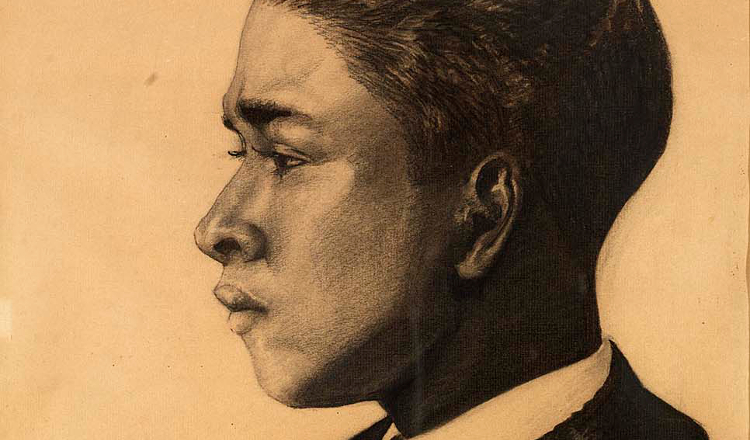 Artistic Agendas:
Dauntless shapes spreading through its own choices, evidence of brush strokes from the tip of an artist’s brush reconstructing into an instrument for advancing a mentality to forward its uniqueness with a requirement that aims to claiming & owning a freedom, proliferating paintings with peace to a dimension called works of Art. This is how I visually feel when I place my eyes into the paintings of Loïs Mailou Jones (November 3rd, 1905-June 9th, 1998).

The Harlem Renaissance can naturally materialize when one thinks about Loïs’ art. What a renowned time frame in the 20th Century to be a part of. To hold your own during a time when racism was politically-correct, sexism was an undisguised reason to dispirit the women who wanted to roam with their artistic talents & gifts, is an attainment opening up the results to success. Her success is still pertinent in our present society, which is why her works of art earning admiration over & over again is justified.

Take her watercolor painting, Brother Brown from 1931. She located a visual median between Post-Impressionism & Fauvism with this specific painting. Her personal brush style produces a man in a scene. It is a scene under a tree, perhaps, Brother Brown is accepting the shade that can come in the design of finding a perfect spot to just rest in. A gigantic sack of potatoes are off to his left, his walking cane is on his right, taking a rest on the outdoor bench as well. A smoking pipe is in his mouth & there is a realization surfacing here—-the smoke from his smoking pipe is merging into a tree trunk & the building in the background, as if, it is a chimney in her watercolor painting. Brother Brown’s ample sized hat has a brim that provides a line, drawing attention to his eyebrows & the introspective look in his eyes. All of these painterly methods is about a prominent visual element for the onlooker to look back into. 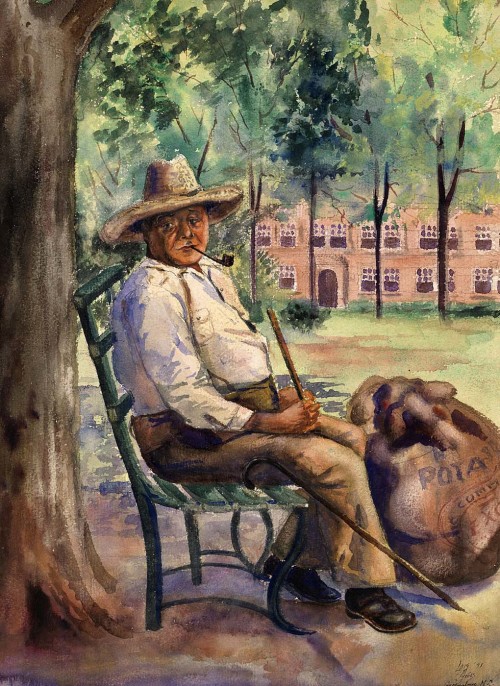 The Many Combinations, Colors, Brush Strokes, Mental Directions for Painting:
What Loïs did with her painting was not to follow the influence of Photography. She started her drawing & painting during the 20 Century, where the still-photography camera was electing painters to leave their medium & find some perquisites in the latent, photographic image. When it comes to Photography, the medium’s stillness is not a very expressive tool for an unseen area which can be imagined. Photography is about an area that can be viewed, photographed with a moment’s wish. Painting is about the mind being wherever it wishes to be, imagined or otherwise. Her paintings are patient, & it does not condone the image that can be developed through photography in a quicker fashion than that of painting.

Another vindication in her paintings would be the other realities going on with the other mediums & their impact during the Harlem Renaissance. Literature was an intellectual benefit for a Black Harlem who prided their educational footing with measuring cultural steps for their own comforts in learning. From the poetic linings strolling through Langston Hughes’ powerful pen to the acute intelligence circulating within the writings about race from W.E.B. Du Bois, to the many Black writers who populated the Harlem Renaissance with their uniqueness–the painters from this rebirth going on in Harlem at the time were confident contributors to a portion of this cultural success as well. James Lesesne Wells, Jacob Lawrence, Charles Alston, Palmer Hayden, Aaron Douglas, Malvin Grey Johnson, Hale Woodruff, & even the sculptors Sargent Johnson & Augusta Savage. These Black painters & sculptors did as much for the artistic, visual mentalities making its way by becoming tangible works of art, & schools of visual training as the pen to the paper did for the articulation which rises when writing out stories with an individual style for a collective Black community, who were absorbing all of this intellectual & visual artistic greatness flowing from creatives inside of their own race.

Les Fétiches (1938) could be Loïs’ most acclaimed painting from her glorious body of work. When you look into it. You can be sized up. There is a stew of serious colors going on here. It is not dark or gloomy. For me, it is about shades of shadow & light that let the visual balance strike a total lunar eclipse; it is as if the full moon, sun & the Earth are on this single piece of linen, all at the same time. As I allow this symbolism of a total lunar eclipse to be contrasted to the African mask residing in the center of Les Fétiches—-the light that she gave back to her Black pride, shadows & overcame the European artists who used the African mask in their art pieces, where the mainstream art community convened on the premise that European paintings of the African mask is a discovery to their journey of so-called inspiration—which at times, can exploit or explain what is African or Black in their world, where this definition of intelligence is fortified by their requirements or rejections. Loïs Mailou Jones’ Les Fétiches purposely neglects this European artistic definition. The powers in this specific painting is about seeing the light in the brush from a Black woman painter putting abstract into an attitude, not discovering but reconnecting to a Black person’s heart, & the minds of their ancestors. 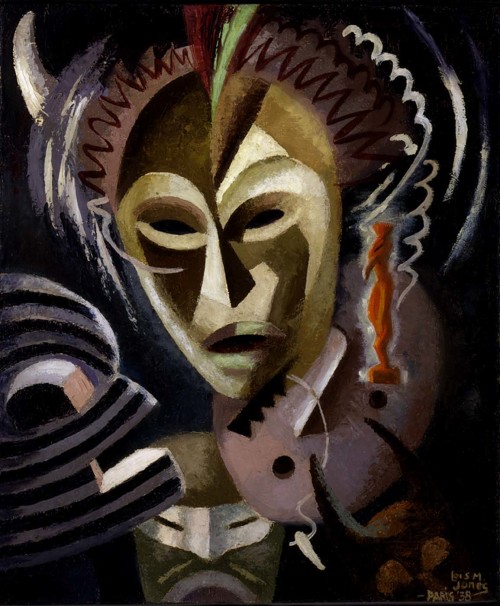 Completely, what has to be discussed when looking into Loïs’ art is the expansiveness in her worldly visual styles. Again, Harlem has an air of breathing in some of her early art; however, her evocative styles of painting & drawing increased through France & Haiti, places she once lived in, with her paint brush. When some of her abstract work is viewed today. The modernist might select a fashionable trait in her art-work from the 1930’s & 40’s. This can seem like a trendy effect that abstract painting has permitted to a world of painters who are presently influenced by Pop-Art’s rhetoric to bend shapes or sizes into lines or forms for the reliability of visually expressing a mood, perhaps a tone that responds to commercialism. In a retrospective sense, Loïs’ work from the 1930’s could be appreciated as artistic fuel she drove off with, in order to travel through other methods (schools of thought) of painting. Les Clochards, Montmartre, Paris (1947) is a traveling point of her passionately excelling beyond her abstract abilities—what you see is a subtle, harmonious, visual performance with colors. A visual message in this particular painting is a whisper about pedestrians sitting on a greenish/turquoise colored bench. One lady is sleeping, another lady is awake, her eyes are off into a quiet thought. Two men with hats, one is reading a newspaper, the other man is looking down (maybe he is asleep?), are seated on the other side of this bench, which has all of them sharing this scene. It is not a moment, that would be photography. This painting is a badge of time. You can wear a badge & this painting is wearing the simplicity of life. If you enable your eyes to go to the back of Les Clochard, Montmarte, Paris, you can see a Brown man (he appears to have blue eyes) sitting inside of an advert for Dubonnet (a sweet red wine from France) at the base of its signage. A badge of time with colors on a board, Dubonnet, sleeping, reading & thoughtfulness are the motives for living in this scene. 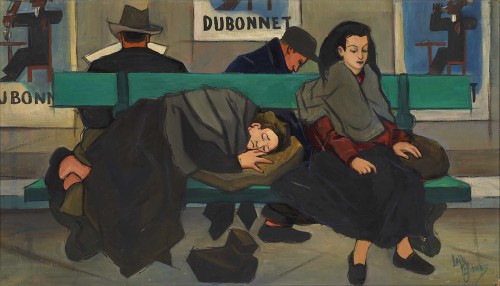 For a lengthy legacy. Her refusal to fall away:
Loïs Mailou Jones lived on this Earth for 92 years. Calculated & disciplined art came from her hands. Pablo Picasso gave this world, 91 years, Herni Matisse would put 84 years of a physical existence into his living. Cecilia Beaux lived to be 87, & Romaine Brooks was blessed to see 96 years of age–these are white American or European painters who are lifted up continuously & parked next to celebrated recognition. It would not be implausible to comprehend the conditions within societies that routinely forget about Black artists. At times, these Black artists have earned accomplishments which fell flat on the history books. Accomplishments that their white American or European artistic compeers are consistently respected for. Other times, the history of Art can purposely let go of the memories of the Black artist. Or, it is a fulfillment of failing to know, an uneducated stiff-jab that the Art World can deliver to the chins of masterpieces that found original breathing room from Black Artists. The cultural parameters for respecting the historical & modern importance from Black Artists as a whole (painters, writers, sculptors, photographers & musicians) is often dismissed & does not make the mainstream’s pick—a pick that happens every 4 or 5 years, determining the one Black artist entry into their mainstream art club.

This kind of modern treatment disclaims the Black artists of right now, then it shines as little bit of light as possible on the Black artist from the past. It is a societal formula that endorses a huge habit of ignoring Black creatives, & this is a traditional, life spinning cycle in the Art World. It spins with an unfair rotation, when it comes down to the appraisal & provenance characteristics in Black paintings, as well as the proper historical coverage, & contributions that the legacies of Black painters are responsible for.

Yet, Loïs Mailous Jones’ work is imperishable. Her legacy in Art is gaining its proper respect in museums, exhibitions & collections. No amount of forgetfulness, or ignoring can alter what has been painted by her brush. As always, Art can physically go on & on, when it is produced through the uniqueness of the artist giving back pieces & pieces of art to this interesting world. Loïs is no longer here in the physical sense; however, her art is still battling & winning against the fights it had to defend against when she was alive & painting with her various styles on canvases or any other material. Time will only compliment Loïs’ legacy in art, giving it a true freedom that will overcome the, “no thank you or she is a Black painter” rejections from the past. Loïs’ imagination was way too powerful for giving up on her Art. Just guide yourself with looking into her charcoal drawing, Negro Youth (1929) to see the chief vision in her artistic willpower to draw & paint without falling away. 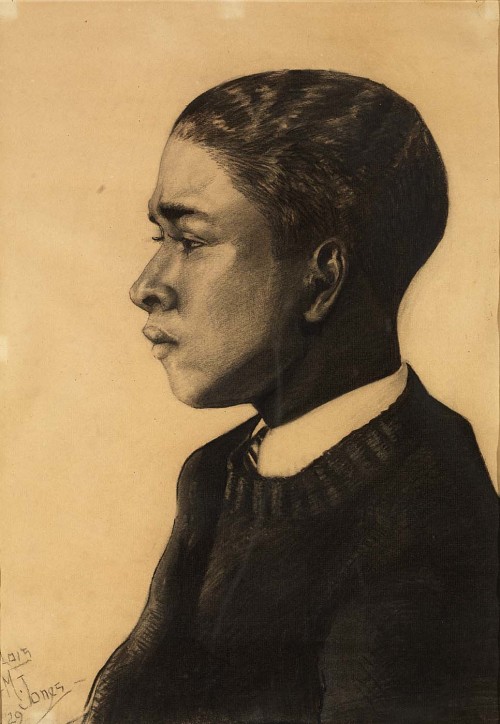 To see more of Loïs Mailou Jones’ work, please feel free to visit her official website. Also, more of her collection can be viewed here at the Smithsonian American Art Museum.

*Shaun La is a writer & photographer working on his book, “The Perpetual Intellectual View Called, Photography: Essays.” His work can viewed at his official website: http://www.shaunarts.com