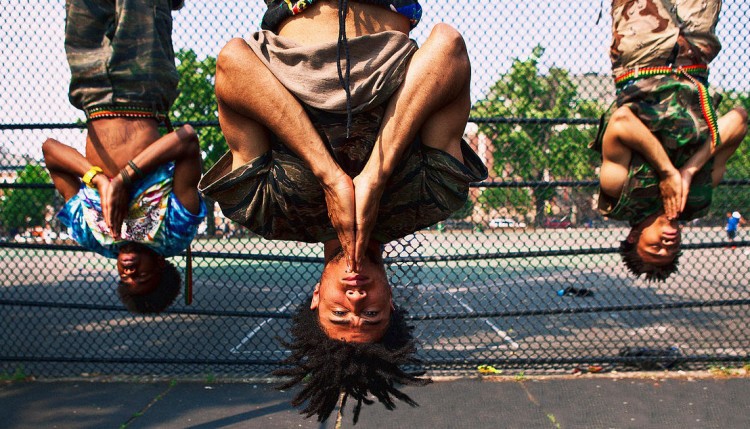 On the sun-drenched pavement at AFROPUNK Fest 2013 in Brooklyn, I sifted through the crowd of flat tops, gold chains and dashikis to get to the front of the stage to photograph whoever was playing that afternoon. I had never heard of the band and it was my first music festival in New York. All I thought was “There are so many of them!” I marveled at this group of young boys singing “Blah zay blah zay blah.” As their performance continued, I found myself as engaged in the photo pit as their most loyal fans. Caught up in the pure fun energy, I wanted to be sure to shoot them again. I asked Oso, the one who jumped into the crowd, if I could send him the pictures and he directed me to their website “Meatloaf Muzik”, now it’s just Loaf Muzik.

One year after that, they were rocking the stage at AFROPUNK Fest again. This time I knew all of their names and the songs they played. I arranged for a photoshoot and an interview because I could see their potential to make history. The Loaf Muzik clan, a group of New York natives who channel a raw NYC aesthetic reminiscent of Wu-Tang Clan, had been taking over the city. As I moved beyond AFROPUNK Fest and dug deeper into the underground music scene, attending shows and parties all around Brooklyn and finding myself backstage taking pictures of various personas, my appreciation for Loaf Muzik as one of the best acts grew strong. 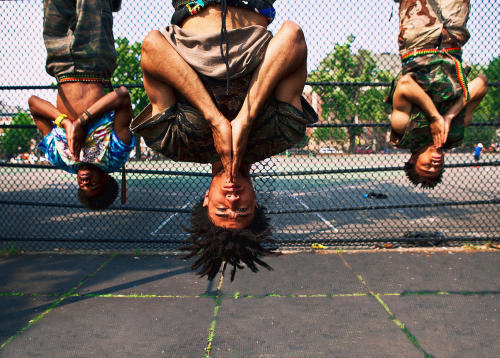 For many people in the Brooklyn scene, the release of the Loaf Muzik album was a highly anticipated date. The performing artists, Shadow the Great, Oso Dope, Kidaf and Shine Sinatra, along with dj Captain Mudd and drummer/dj Cornelio Octavious, had been selling out shows from coast to coast, flying out to Los Angeles for TeamBackpack and taking road trips to Houston for SXSW and Atlanta for Red Bull Sound Select. Their strong work ethic has brought them far as an indie group. They are heavily involved in all aspects of their craft, writing and producing their music and directing their own music videos (with the creative eye of photographer comrades Cisco and Sen). 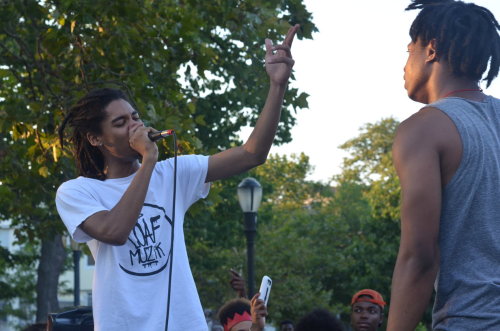 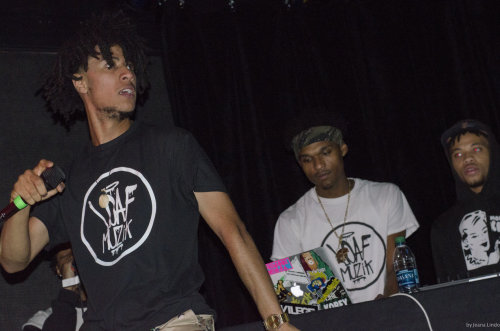 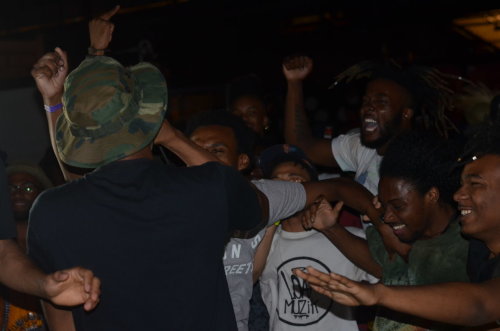 It seems that most popular artists today are too content with putting out songs that retread the same tired subjects of materialism and flossiness. Loaf Muzik covers new ground by returning to old roots; their honesty sets them apart. The image projected on their social media pages of skateboarding graffiti writers who watch anime when they’re not making beats is an accurate one. As a group, their bond can be felt through each performance on stage and in their studio recordings. Their love for the elements of hip-hop and the streets comes across in the precise execution of their dynamic beats and Busta-Rhymes-esque flows. This tightly knit crew knows how to put on a great show. Picture a room full of joyful noise and youthful energies bouncing off every wall. 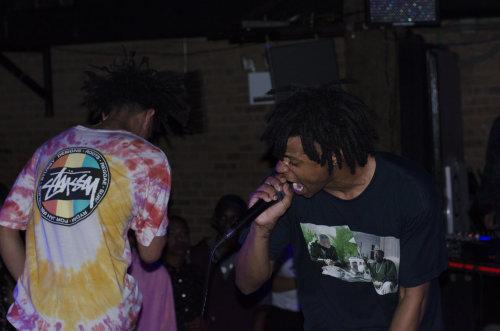 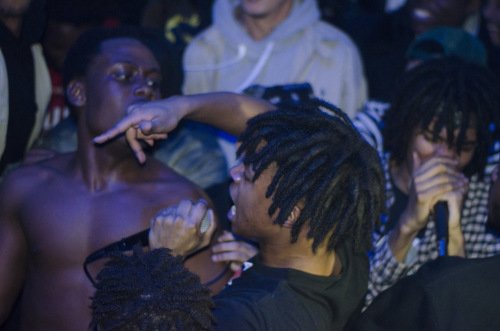 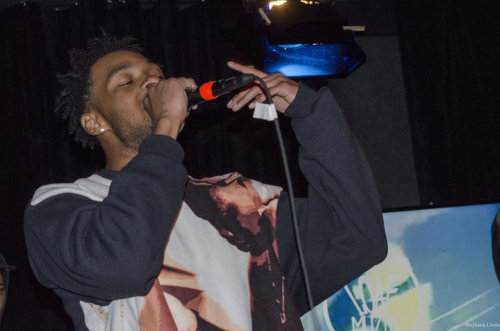 Shadow and Oso usually take center stage with Shadow spitting hot fire until he breaks into a sweat, passion in his voice, veins popping from his neck. Oso will be dancing and stomping energetically around, often jumping up high, sometimes climbing elements of the stage, usually turning red and losing his voice. Kidaf casting a spell with his complex rhymes, makes interesting gestures as he raps. Shine stands with his arms folded, occasionally raising a fist or nodding his head in support of his musical brothers. On stage and off he is silent but deadly. When he does open his mouth, he drops groundbreaking bars; “let the music take you like a straight abduction.” When the verse features more than one of them, you’re guaranteed to see them gesticulating and speaking in real engagement with each other. If their b-boy friends Ramo and Collie are present, they may throw in a few headstands to complete the vibrant painting of hip-hop in action. At the end of the set, they end on a high note, jumping into the crowd, inviting fans to wild out on stage with them. 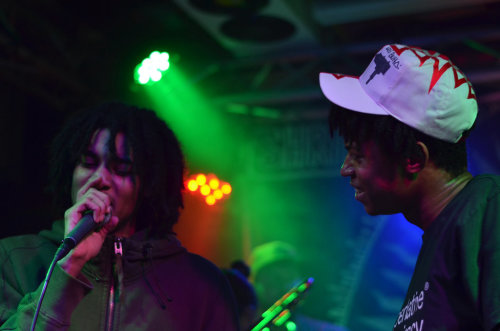 Loaf Muzik brings people together. They are political activists in their own right. They supported the Fight for 15 march for raising the minimum wage, and their lyrics reflect struggles of common people. Their first collective album, ‘Live From the Dungeon‘, expresses the richness of their ideals and experience. Through the music on this album, they bring attention to the darkness, “blacker than the night when they murdered Sean Bell”, faced by city youths daily. Lines like “still we ask for quarters, can’t afford a can of soda” and “ain’t nobody givin’ handouts when you comin’ from the bottom” speak to the economic hardships experienced by people of color everywhere. 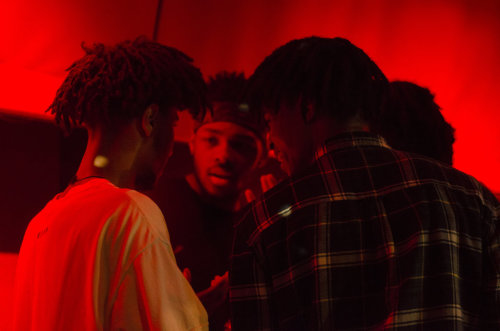 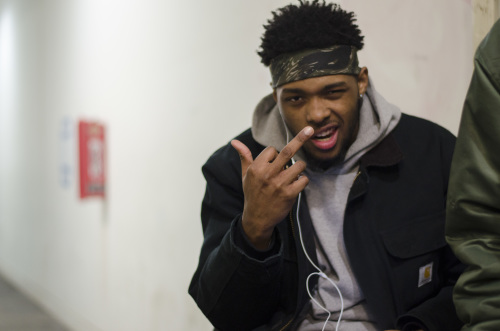 Telling their story while bringing a sharp critique of the system they live under, we hear them rap lyrics such as, “I don’t give a **** about the government. They shooting’ kids and lock us up, but they will never publish it”. Recalling the diversity in early New York hip hop, Oso Dope nods to his Afrolatino heritage by incorporating Spanglish lyrics in their song, “Percasets.” These individuals are complex. When hearing Shadow describe himself as “the sun in the slums shining bright on a bum” and Kidaf talk about seeing the “beauty in the hideous, insidious minds”, images of spoken word poets pouring their heart out to packed tiny rooms come to my mind. Their song “Keep it Kool” brings hood life to the forefront, illustrating the grim situations they live in, set forth by the government, mentioning “thieves outside the liquor store with cups begging for money” and the “shorty with the curves on the curb” that says she’s 22. 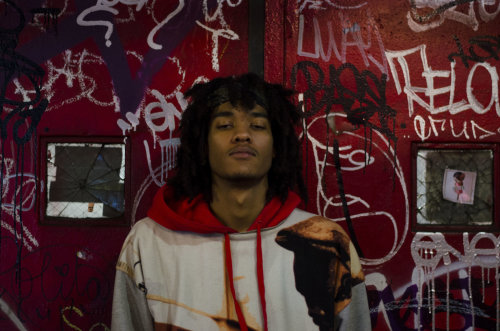 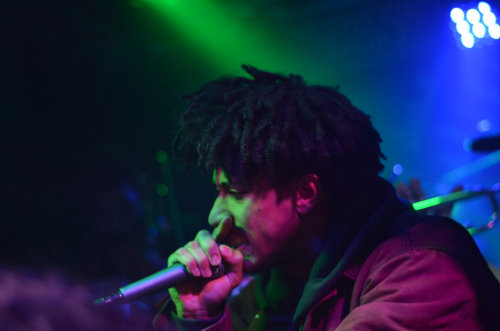 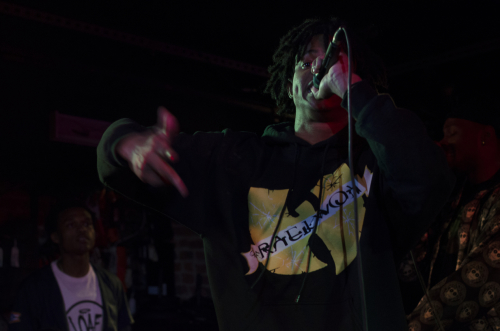 ‘Live From the Dungeon’ is one of the most eclectic mixes of music featuring the best MCs and talent coming out of New York right now. Citing a diverse range of influences from Ella Fitzgerald to Damian Marley to Camp Lo to Cam’ron, Loaf Muzik produces music that is remarkably harmonious in a world dominated by monotonous trap tunes and disjointed chatter. Live From the Dungeon is a treasure because it includes songs to bump on a long car ride, feel-good music, songs to fall asleep to and sonic artworks like “Turn Off my TV”. Talking about everything from ADHD to haters to weed to girls who wanna have their babies, this release is a genuine mind map from boys in the hood. With legends like Evil Dee sharing the link to their album on Instagram, Loaf Muzik is on the right path.