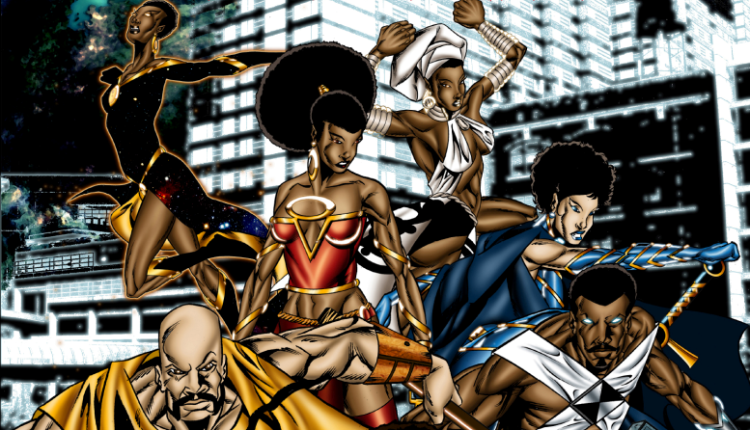 Hello, all! My name is Jiba Molei Anderson. I am an illustrator, writer, graphic designer and educator. In short, I am a visual communicator. I am also the CEO of Griot Enterprises, a publishing company specializing in graphic novels and a visual communication studio devoted to developing quality creative for industries tied to, but not limited to, the entertainment industry as a whole  (i.e. music, film, television, advertising, etc.). Comics truly have the ability to touch people across the globe. Comics know no boundaries; they are truly democratic. A good story transcends race and culture because comics, unlike other forms of entertainment, are a personal experience. 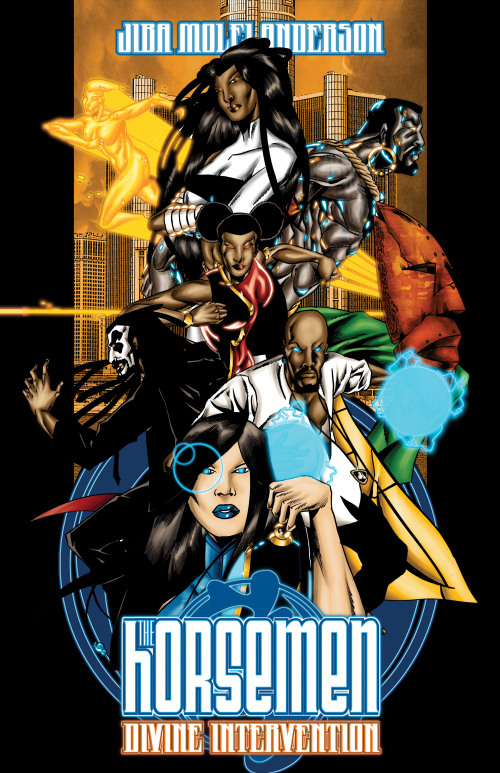 The superhero is a mythological construct unique to American society and the backbone of the American comic book industry. The superhero is the construct of immigrants, people from different cultures coming together to form a new nation where the unique attribute of each culture contributes to greater whole.

African American superheroes are as important as African Americans in the tapestry of this country. As, arguably, the first immigrants (other than British and French) of America, African Americans were, initially left out of the equation when constructing the superhero myth and were relegated to supporting roles. 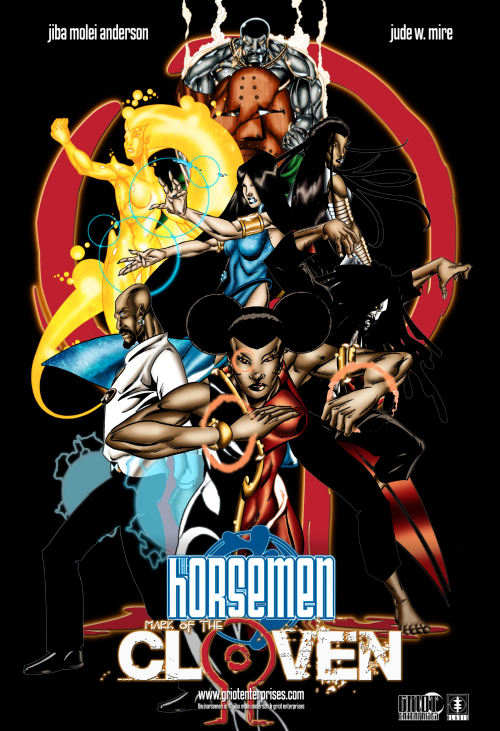 With the Black Panther’s appearance in 1966’s Fantastic Four #52, African Americans were introduced into the “mainstream” consciousness of the four-color world. However, in order to continue the African American superhero’s relevancy, we as African American creators must tap into our folklore, mythology and history to give our characters depth and substance so that our creations go beyond the limitations of the perception of color and recognized as a crucial thread in the fabric.

My work examines the root of the superhero, mythology, thereby taking an esoteric approach to the genre. Mythology allows me to craft a story featuring people with extraordinary abilities that though they use those powers for good, they are still subjected to the same feelings and frustrations we all have living in these modern times. 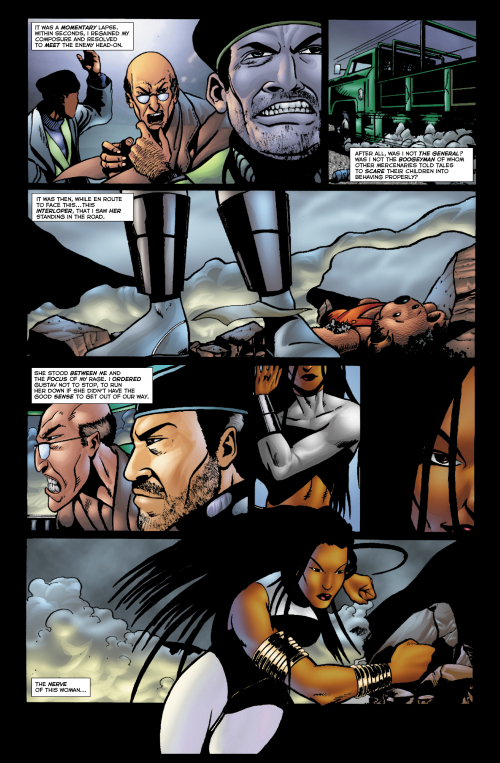 I have always had an interest in mythology. Since the original Clash of the Titans, I had been fascinated with tales of gods and heroes. I ate up Greek mythology, then Norse mythology (thanks Jack Kirby!). Now, I knew that African must have had some interesting stories to tell beyond Egyptian myth. So, I started studying African mythology eventually honing in on the faith systems of the Yoruba and other Western/Central African cultures, which survived the slave trade and merged with Christianity to create religions such as Vodou, Santeria and Candomble.

I was also influenced by what I like to call the “Holy Trinity” of the Black Comix Movement: Milestone Media, Brotherman and Tribe. These books didn’t influence me in the development of what was to become The Horsemen. Rather, these books were the actualization of where I knew I could fit in the landscape. All of the titles were the Dream realized. All of the creators, from the Sims brothers, to Todd Johnson and Larry Stroman to the firm of Cowan, Davis and McDuffie were my inspiration to create not only the property of The Horsemen, but also the company that would become Griot Enterprises. They showed us the path and paved the way that we all should follow. 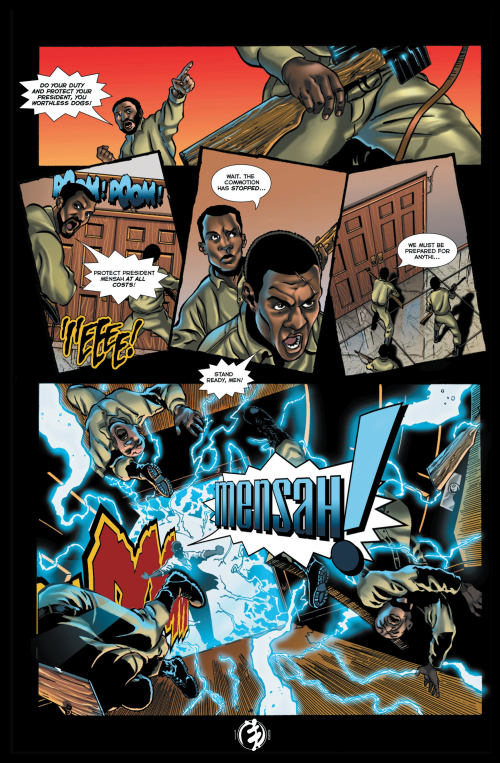 I’ve always been a fan of alternate dimensions and, mythology is great tool in exploring that concept. Unlike the Marvel Universe, which treats the gods of myth as aliens from other planets, I prefer to think of mythological beings as realized potential if certain roads were traveled as opposed to others.

My property, The Horsemen is the story of seven ordinary people thrust into extraordinary circumstances, as the gods of ancient Africa possess them. The gods have chosen them to protect humanity from itself…whether humanity wants them to or not. They combat those who control the fate of the planet. Through their actions, the world would never be the same. To date, there are two graphic novels in the series: Divine Intervention and The Book of Olorun.

I wanted The Horsemen to reflect my worldview. I wanted to show a very modern Africa, which was more “real-world” than “Wakanda.” I was extremely tired of the “famine and underdeveloped” narrative that the continent is saddled with in this country. I also wanted to address the problems that Post-Colonialism left behind on the continent as well. 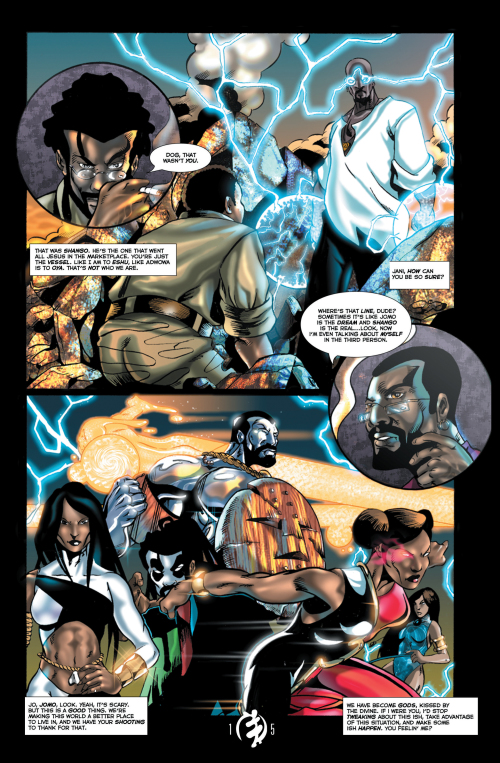 I wanted the world of The Horsemen to feel real, free from the mythology of Afrocentrism and its adherence to Egyptology. I wanted to work with a different African faith system, a system that when The Horsemen was created (in 1997), no one, I mean NO ONE, was thinking of. No one was thinking of using the Orishas as a launch point for a comic book world at that time.

I wanted to focus more so on the Western part of the continent where my family, and the majority of African America hail from. I wanted The Horsemen to be different and contemporary… It needed to be different and contemporary.The Horsemen universe is in a state of expansion right now. In the current series, Mark of the Cloven (series writer) Jude W. Mire and I are expanding the world of “post-Spark event” Africa and the emergence of Lumumba City. This book is extremely political and social in its scope. The United States is in an economic shambles and Africa has become the new superpower, the new land of opportunity. A reverse Underground Railroad has emerged as the U.S. has adopted the Retention Act, an extreme piece of xenophobic legislation, which prohibits Americans emigrating to the continent. 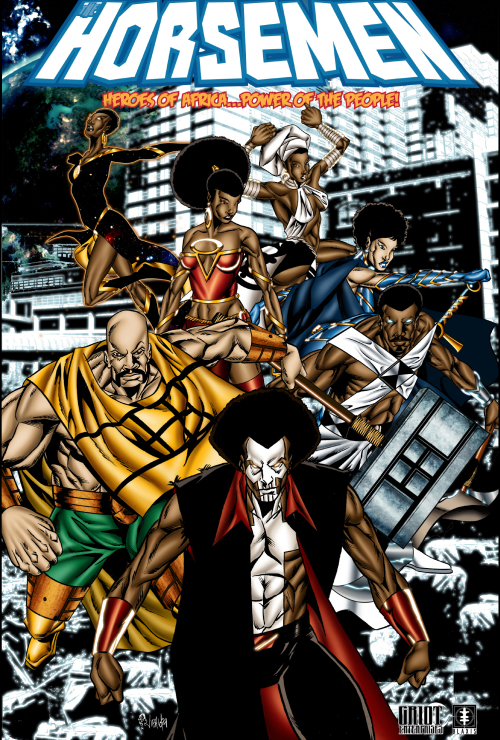 Now, in this political hot potato, you have the bastard children of the Deitis (the opposite number of The Horsemen) also known as the Cloven. They despise their parents and they see taking over African and destroying what The Horsemen are building as their opportunity to usurp control of the world from their elders. We’re three issues in so far, with the next three coming out this year.Simultaneously, I am working on a major project called Lumumba Funk, which re-imagines The Horsemen as if they were created in the 70s and became a major hit during that era. This concept is such that a completely different team of Horsemen exists… Before the ones we’ve seen currently in the books that already exist. I did not create these Horsemen. Someone else did. Lumumba Funk will tell the history of the 70s-era Horsemen as well as give an overview of the influential story arcs and how The Horsemen influenced, and was influenced by, that era.Yeah, the exploration of alternate dimensions gets even deeper. 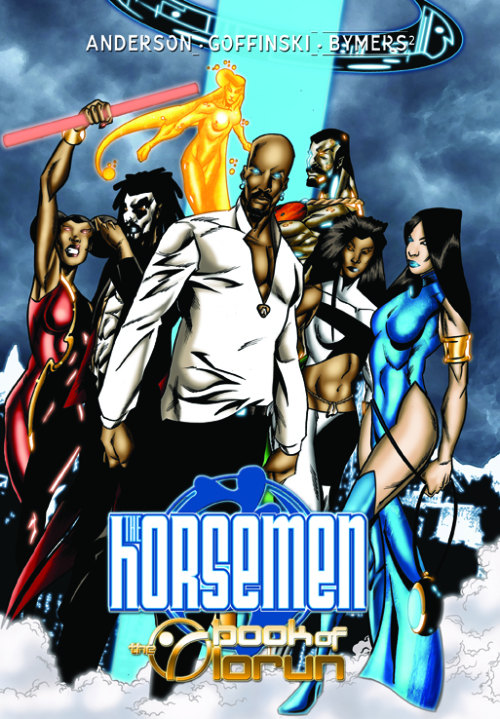 Ultimately, the Horsemen saga, what I’ve coined The New Mythology, is one of spirituality and realized potential. It’s the saga of what happens if humanity put the B.S. of petty superficial divisions aside and focused on the big picture…And, we need to… Ragnarok is coming…

The Horsemen is that book. It is the answer to all of your questions, your complaints, your frustrations, your hopes and your dreams. The heroes are powerful, inspirational and diverse. The story is relatable, deep, substantial and a lot of fun. The book looks good. The Horsemen stand toe to toe with the Justice League, the Avengers, the Authority, the X-Men and more. Marvel and DC could not have created The Horsemen. The Horsemen is global. The Horsemen is for everyone.

My work is defined by pop culture. From Alphonse Mucha to Frank Frazetta, from comic books and animation to “Grindhouse” films, these “low-brow” creations sparked my imagination. Their bold and shameless design and marketing aesthetic inspire the way that I make images and bring my message of equality, political discourse and social justice to the masses.Everything I make is protest art. The comic book is my soapbox. 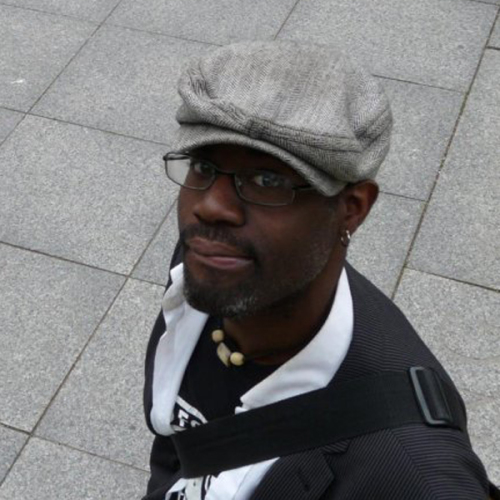